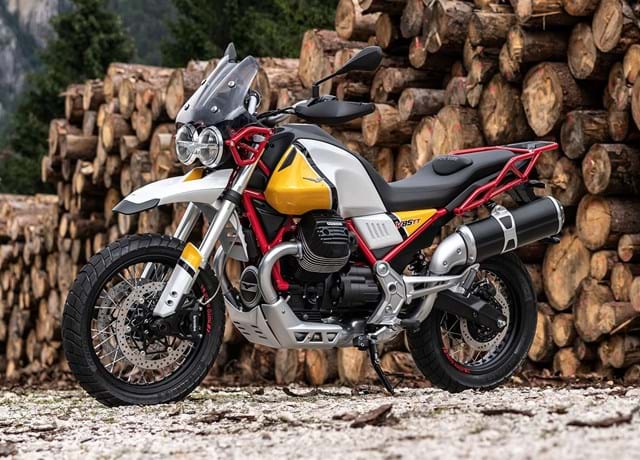 If a V-twin motorbike is mentioned, the odds are you’ve pictured something red, Italian, and with Ducati written on the side.

Or possibly you thought of a Moto Guzzi or Aprilia. Despite the success of other manufacturers with two cylinder V configuration engines, there’s something about Italian motorbike firms and the V-twin. Unless it’s a Harley-Davidson.

Arranging the cylinders in a V means a more complex and longer engine than a parallel layout. But despite this, V-twins have been around for a similar length of time since the early 1900s.

Three of the brands mentioned above basically cover the range of V-twin (and L-twin) motorbike engines available. The main differences are the angle of the cylinders in the V configuration and the way the crankshaft is oriented.

Starting with the crankshaft, the majority of motorbike engines are a transverse set-up. Which means the crankshaft is mounted perpendicular to the frame, as in Harley-Davidsons and Ducatis. This produces a narrower engine, but means the rear cylinder tends to get less airflow.

Meanwhile the air-cooled shaft drive Moto Guzzis opt for a longitudinal crankshaft. That means you end up with the cylinder heads rising up on each side of the motorbike. And without something to balance the effect of the crank, you’ll find the bike might twist slightly to one side with fast acceleration and the other when you brake hard.

The other major difference is a matter of degrees.

William Harley and the Davidson brothers began advertising a 45-degree V-twin engine from 1907 with double the power of their first single cylinder bikes and a 60mph top speed. But following the introduction of a smaller, better performing version in 1911, V-twin sales picked up and have dominated production since 1913.

That initial trade-off between a large capacity, high-torque engine in a relatively compact package means that the cylinders fire at uneven intervals. But rather than being a problem, it’s now become a Harley trademark, including the distinctive “potato-potato” sound.

The angle of the cylinders and uneven firing does mean plenty of vibration from the engine, which Harley-Davidson reduces in various ways such as rubber mounting systems or counterbalancing.

Most cruisers tend to have a similar cylinder angle, whether they’re from Harley-Davidson, Indian, Victory, Honda (e.g. the VT1100 Shadow) or Suzuki (e.g. the VX800).

Honda stretched the angle up to 52 degrees with the V-twin engines powering various models including the Shadow, Transalp, Deauville and Africa Twin.

Kawasaki joined them with the Vulcan range but the 45 degree transverse V-twin will always tend towards cruising models, with the notable classic exemptions of the Brough Superior SS100 and Vincent Rapides.

The biggest stretch for cruisers comes with the Yamaha Virago, which featured a 75 degree angle V-twin.

While Harley turned the limitation of a V-twin engine into a selling point, Ducati took a different approach. The 90-degree engine designed in 1970 by Fabio Taglioni has been known as the L-twin because of the wide angle between the cylinders. The Italian firm dived straight into Grand Prix racing with 500cc models and the Ducati 750 GT production machines.

The combination of trellis frames and V-twin engines became a Ducati trademark running across the World Superbike and production motorbikes including the 888, 916, 998 and the final high performance 1299 Panigale. It’s a tradition that’s now coming to an end as the firm moves to a V4 derived from their Desmosedici MotoGP machines.

So why did the firm stick with the wider angle V-twin for so long? The transverse position means the engine is longer but narrower. And the configuration also means that larger Ducatis need water or oil cooling for the rear cylinder. But it also gives perfect primacy balance. So you get smooth power delivery and handling.

That explains why sports-focused V-twins tend to always have cylinders at a 90 degree angle. Examples include the Suzuki SV range and V-Strom but also include the Honda VTR1000 Firestorm and World Superbike racer SP1.

Moto Guzzi developed its own Italian V-twin in the 1960s, almost a decade before Ducati. Having experienced the problems of a massively complicated V8 500cc Grand Prix motorbike that often failed to finish, designer Cesare Carcano went for a sturdy air-cooled V-twin to win a competition sponsored by the Italian government for a new police bike.

That original engine design has been revised and evolved over the years to increase the capacity and power, including the current range of the V7, V9, California and MGX-21. The V-twin is now 1,380cc with 96bhp, which is almost double the capacity, and more than double the power, of their first V-twin.

The advantage of the design is that the Moto Guzzi V-twin leaves plenty of room in the frame for the transmission and shaft drive. The disadvantage is the torque reaction on sharp acceleration and deceleration. Although the effect tends to be countered to some extent with a variety of manufacturer additions like rotating flywheels and alternators, it’s still a part of riding a Moto Guzzi.

But as Europe’s oldest motorbike manufacturer in continuous production, Moto Guzzi has worked to turn the character of their engine into a selling point in the same way as Harley Davidson.