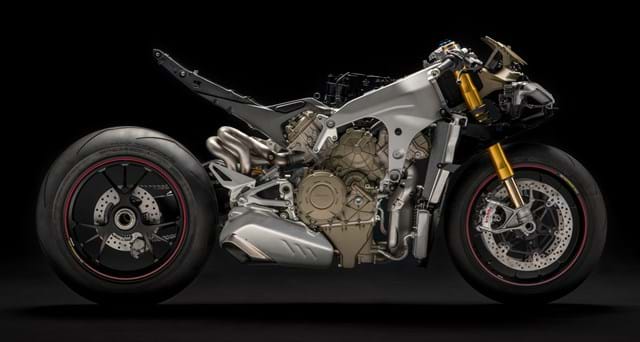 Many of the most desirable motorbikes on the planet use a V4 engine because although they combine some of the best attributes of both a V-Twin and inline four cylinder engines.

Typically a V4 will be complicated and expensive to produce. But the benefits are clear with Honda, Ducati, Aprilia and KTM using V4 layouts in MotoGP.

Arranging four cylinders in a V configuration makes the engine much more compact. And it also gives a short length across the crankshaft. As with a V-twin, using an angle of 90 degrees gives perfect primary balance, and it will produce less rocking than an inline four.

Unlike other motorbike engine types, the V4 didn’t emerge until the Matchless Silver Hawk in the 1930s. But over the years it slowly gained favour as a high performance option with both two stroke and four stroke examples appearing.

Virtually all of the competitors in the 50cc two stroke Grand Prix era slowly moved from a square four design to V4s and this also filtered down to smaller classes and production bikes, including the iconic Yamaha RD500LC.

They may have suffered with reliability problems, but they paved the way for some legendary bikes. The first was the Honda VFR750F which quickly changed from a pure sports bike to the sports tourer which still exists today as an 800cc model.

They also spawned 400cc versions originally produced mainly for the Japanese domestic market, but which spawned an entire ‘grey import’ industry in the UK. The cost of the smaller V4s meant that the officially imported versions cost more than much larger motorbikes when new.

Finishing the trio of Honda V4s is the ST series, also known as the Pan-Europeans. These were more touring focused than the VFR, featuring shaft drive, and a large fuel tank below the saddle.

But Honda is not the only Japanese manufacturer to have used the V4 engine. The Yamaha V-Max (known as the VMAX from 2009) appeared in 1985 with a 1,197cc 70 degree V4 engine which produced arm-wrenching acceleration.

The later version changed to a 1,679cc 65 degree V4 and improved the chassis, suspension and brake systems, which were all weak spots on the original.

Aprilia also chose a smaller V-angle for the WSB championship winning RSV4, with a 65 degree V4. Designed specifically as a superbike racer, the production models have also become desirable road bikes and deliver a V4 engine for a similar price to the inline fours from BMW and Japanese manufacturers.

But possibly the biggest modern endorsement of the advantages of the V4 comes from Ducati. The Italian firm has historically been known for success with 90 degree V-Twins. But their MotoGP project spawned the exclusive road going Desmosedici RR with the same 989cc V4 ‘long bang’ engine and a £40,000 price tag.

And the new Ducati Panigale V4 marks the end of new high performance V-twins from the Bologna company. The Desmosedici Stradale engine is derived from the MotoGP version but adapted to be suitable for a production motorbike.

As a result, the new Panigale is 4.5kg heavier, but only slightly wider. In return, you get a claimed 211.2hp from the 1,103cc Desmodromic engine, which rotates in the opposite direction to the wheels to reduce the gyroscopic effect and turning effort.

Switching the focus of a motorbike company to the more expensive and complicated V4 engine design is probably the best endorsement of the performance, power delivery and compact size of the modern V4. And it’s happened twice, given the long-term commitment of Honda, and the current switch by Ducati.

The final thing worth noting across almost all V4 motorbikes is the unique sound they deliver. The exhaust note is almost always a throaty performance growl, from the smaller capacity Honda NC30 and NC35 to the dominant Ducati Desmosedici and Honda RC213V in MotoGP.