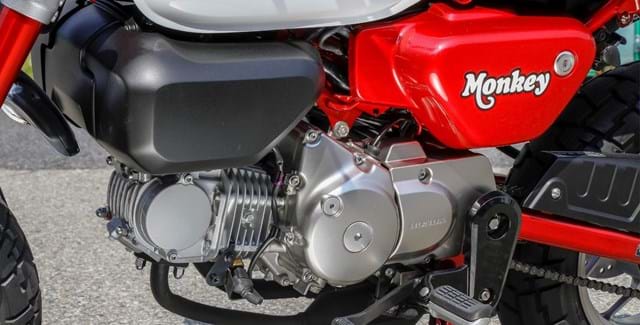 It’s safe to say biking might not exist without the single cylinder engine. Somehow it manages to power the biggest selling motorbike model in history, a host of dependable everyday transport and plenty of lawnmowers.

The design of a single cylinder engine is simple, small and light; all three attributes lend themselves to biking, particularly in the earlier eras and more recently for competitive off-road racing.

A simpler design means easier maintenance and repairs but it's also easier to cool than a multi-cylinder engine where all of the cylinders are stacked closely together.

Only singles and V-Twins tend to be still purely air-cooled on modern bikes and usually only in the lower performance categories.

If you combine it with a two-stroke design, you use fewer moving parts and produce more power for the capacity and weight, because the piston completes a power cycle (up and down), as the crankshaft turns once.

But create a four-stroke version, where the crankshaft has to turn twice, and you get a more fuel efficient motor with solid torque and dependability. That’s why single cylinder engines have played such a big role in the first 70 or 80 years of biking.

Single cylinder engines have an inherent capacity limit though, which is why you will rarely find any beyond the 600cc-700cc range and why the vast majority are at the other end around 125cc.

The larger an individual cylinder is, the more weight has to be moved up and down with each rotation of the crankshaft.

This makes each burst of power larger and produces more vibration overall, which is why the larger singles earned themselves the name "thumpers".

The biggest manufacturers of motorbikes all tended to start off with single cylinder creations as the 1900s began. The earliest versions were quite often four-stroke designs from the likes of BMW, Norton, Triumph, Harley-Davidson and more.

If it looks like someone has inserted a small engine into a bicycle frame, there’s a good chance it’s a single. That continued as biking evolved into the post-war Café Racers from British manufacturers, and into the modern era.

A century after it all began and the current crop of Moto 3 race bikes still use a single cylinder engine for one of the highest levels of motorbike racing. And most of the motocross and off-road world still relies on either one or two cylinder engines across the entire market.

So why isn’t every motorbike a single? Well they do have some big disadvantages.

While two-stroke singles have declined, the four-stroke version continues to thrive. It’s what helped propel the Honda Super Cub to sell more than a 100 million models from 49-124cc.

The current Moto3 championship runs with KTM 250cc four-stroke single engines and recent examples include the KTM 690 Duke, the Yamaha MT-03 and the Honda Monkey.

Two popular examples that demonstrate the characteristics of the four-stroke single well are the BMW G650 range, and the Suzuki DRZ400. Both use a four stroke engine which offers a much wider range of power than a two-stroke, particularly low in the rev range.

You can plod along green lanes all day, picking your bike up after falls and still know that you’ll get to your destination eventually with either a DR-Z400 or an G650GS.

The smoother power delivery also means you can make better use of the more modest output with many four-stroke singles. The KTM 690 Duke achieves 72.5bhp and 120mph, which is reasonable for a naked middleweight.

But it’s also smooth, user-friendly and easy to ride. Something shared with the smaller Yamaha MT-03, and the frankly bizarre-looking and short-lived BMW F650CS.

If you’re looking for a sensible middleweight or a green lane machine, the single cylinder four stroke option is always worth considering e.g. Honda CRF250 Rally.

If you do have a large budget and want to choose one of the most unusual single cylinder machines ever made, then you might want to check out the Ducati Supermono. Just 65 were made between 1993 and 1995, to race in the European Supermoto Cup, which supported World Superbikes.

With a top speed of 141mph and weighing just 121kg, the Pierre Terblanche machine may well have influenced the current Moto3 race bikes, which use 250cc single-cylinder engines limited to 55bhp and reach top speeds of around 152mph at a 14,000rpm rev limit.

Why Did Two Stroke Engines Fade Away?

The relatively powerful nature of the simple two stroke single cylinder engine made it popular in racing on roads or dirt. Yet since the 1990s, they’ve largely disappeared except for small capacity mopeds and scooters.

There are a couple of reasons for the demise of two stroke engines.

The power output will always be concentrated on a fairly small part of the rev range and that means you’re constantly working to try and keep your motorbike moving at a decent pace.

Outside of the powerband, you’ll watch other riders pulling away from you as you wait for the revs to build.

Some people find it addictively fun, particularly if you’re riding on a race circuit or dirt track. But on the roads, it’s more of a hassle, despite the awesome sound of an angry wasp trapped in a biscuit tin at 15,000rpm.

Total loss cylinder lubrication is the technical reason why you have to fuel up with a mixture of petrol and oil. It’s also why every two stroke is accompanied by a cloud of blue smoke.

Not everyone appreciates the aroma of pre-mix, and as environmental concerns have become more important, it made more sense for manufacturers to focus on multi-cylinder engines.

Add the potential risk of an engine locking up, and you understand why bikers raised on two strokes have a compulsive need to always cover their clutch lever!