Types of Motorbikes: The Complete Guide (2022)

There are many different systems out there for describing the different classes of motorbike and it's a constantly evolving problem.

We've taken a look at the most common styles and trends, from the cheapest scooter to the most expensive adventure bike: 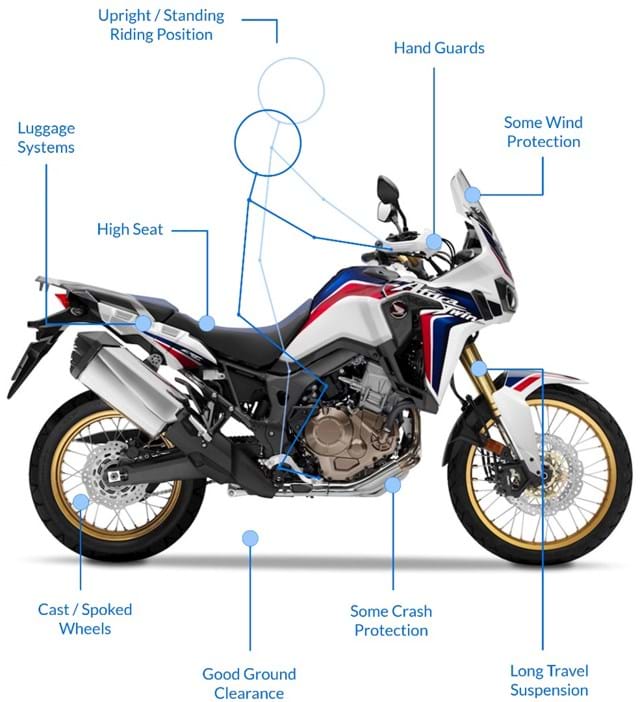 They aim for maximum capability, range and the odd bit of very light off-road/dirt track adventuring, although taking a large heavy bike properly off-road will be very hard work.

Some older definitions also referred to them as dual purpose, dual sport and on / off-road bikes.

The bikes tend to be so good at commuting, touring, sports and more recently looking good, that they are generally taking over from the other types of bike, particularly sports bikes with their aggressive and uncomfortable geometry.

Check out our top ten adventure bikes or see all of the adventure models in our bike chooser. 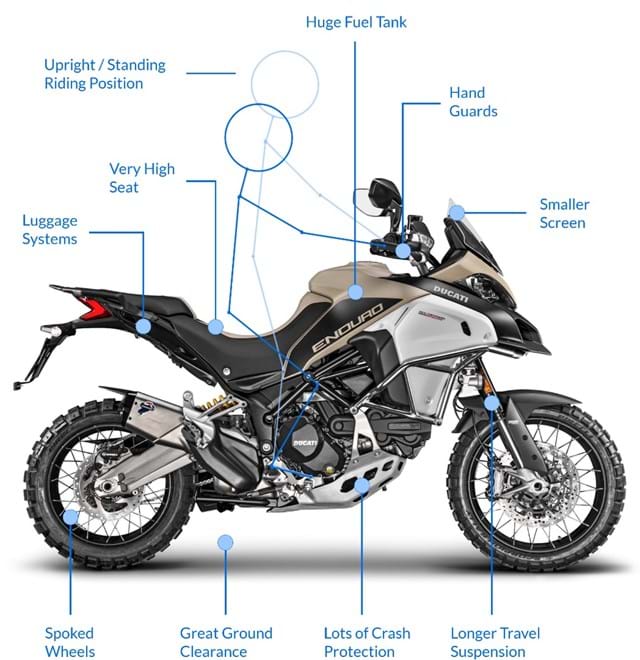 Some manufacturers offer the same bike in a more off-road focused variant, such as the BMW R1250GS Adventure and Honda Africa Twin Adventure Sports, designed for proper off-road adventures.

They often have much larger fuel tanks, lots of crash protection, even longer travel suspension and some of the highest seats going.

Check out our top ten off-road adventure bikes or see all of the models in our bike choosing tool. 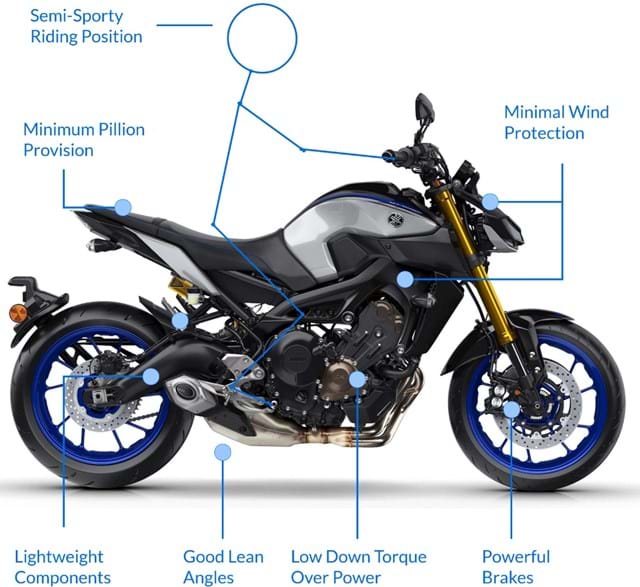 Roughly half of naked bikes tend to start off life as last season's range topping sports bikes, which then have their fairing removed to make them "naked".

Other tweaks usually involve making the geometry less aggressive, flatter handlebars, no screen, single light cluster and some tidying up of wiring etc to showcase the engine. The engine is sometimes from a previous generation sports bike to save cost.

They are also referred to as roadsters, especially by BMW, or standard bikes while the highest power models are sometimes called muscle bikes, street fighters or hyper-nakeds.

Some bikes, like the Honda CB1000R straddle the line between modern naked bikes and modern bikes with retro styling so end up being called neo-retro. 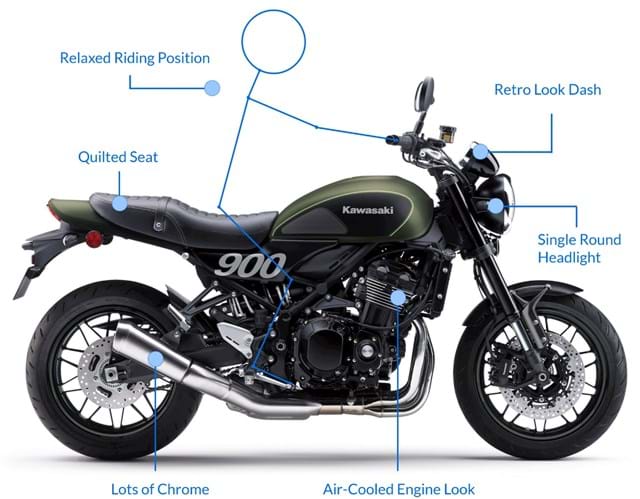 Most of the retro models you can buy today started life as a sporty naked bike which has been modified to look more traditional, but without sacrificing all the modern tech and riding experience you would expect from a new bike.

Closely related are modern cafe racers which tend to start life as retro naked bikes but with the addition of low bars, a headlight fairing and pillion seat hump.

Check out our top ten retro bikes or all of the retro models in our bike chooser. 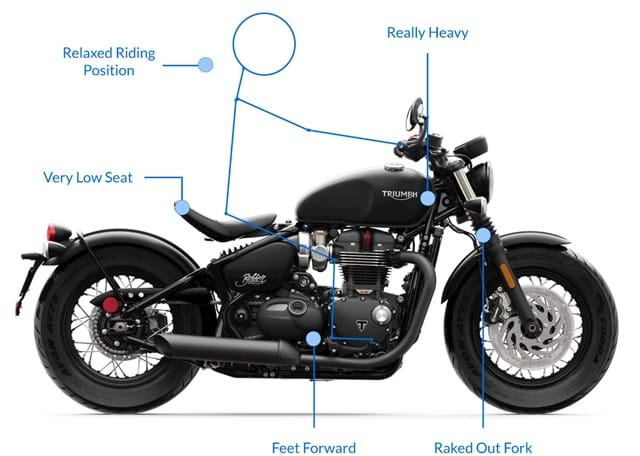 Cruisers tend to have a very relaxed feet forward riding position with the body upright or leaning slightly back, a very low seat, large rear tyre, raked out fork and an engine focused on low down torque rather than top end power.

They also tend to be really heavy and the power figure will often look at odds with the size of the engine, for instance "only" getting 165bhp out of a 2.5 litre engine in the Triumph Rocket 3 R.

They are more about looking and sounding good at low speeds than getting from A to B as fast as possible and getting your knee down in the corners although they will also munch motorway miles with ease. The plentiful low down torque also allows a more relaxed approached to gear changes.

Ducati like to be a bit different and have worked out how to make a bike with cruiser styling perform like an outright sports bike with the XDiavel.

In the USA cruisers are the most popular style of motorbike by some margin with Harley Davidson being a main player. Other names for them include choppers and power cruisers.

Check out our top ten cruisers or all of the cruisers in our bike chooser. 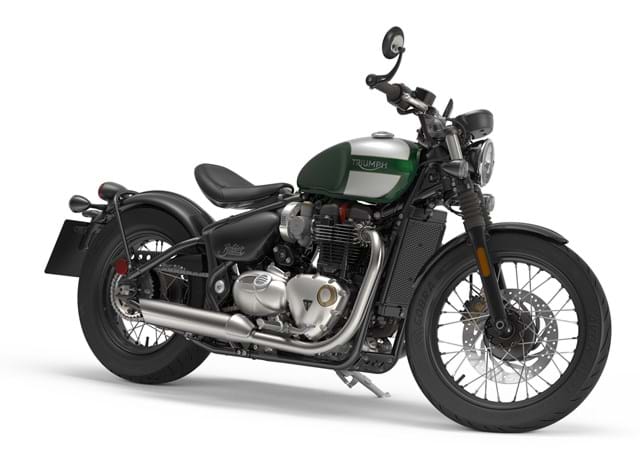 Bobbers, short for bob jobs, are a style of bike within the more general concept of cruisers. They tend to have a fixed rear frame with no suspension and a single seat attached to the frame via one or two shocks.

It keeps the rear of the bike really clean but is obviously not very luggage or pillion friendly. Recently Triumph have cunningly bought back the bobber look with the Bonneville Bobber by hiding the usual rear suspension under the seat. 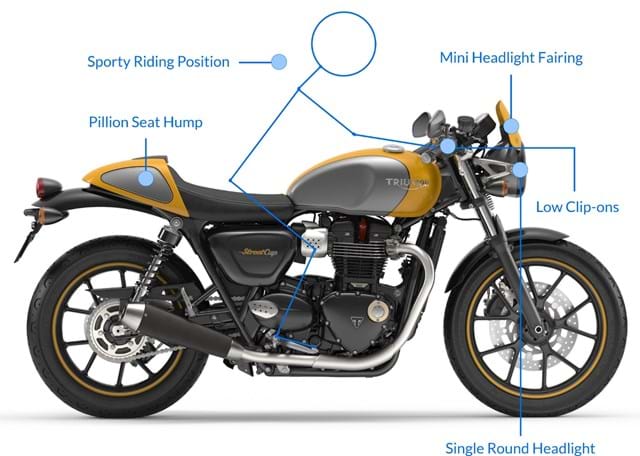 Cafe Racers tend to take a standard traditionally styled naked bike then add a seat hump where the pillion would sit, low clip-on handlebars and a small screen / fairing around the single headlight up front.

They were originally about lightweight speed and handling but these days it's more of a styling exercise to cash in on the demand for modern retro bikes.

Check out our top ten cafe racers or all of the cafe racer models in our bike chooser. 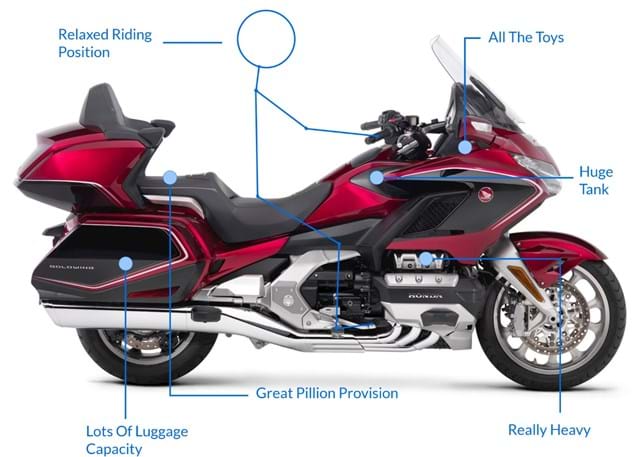 You can tour on almost any motorbike or scooter if you put your mind to it, however some are more suited to touring than others.

Touring bikes are all about luggage capacity, range, comfort for two, all the toys you could want and sometimes even camping gear to boot.

They aren't about light weight performance or, like sports tourers, a compromise between sportiness and outright touring capability. Unfortunately there is a down side to all that capability; they tend to be some of the heaviest bikes on the road.

Some are built specifically for the job, like the Honda Goldwing, while others are based around sports tourers or adventure bikes like the Yamaha Tracer 900 GT.

They often feature fixed panniers or a fancy system to remove the luggage quickly without ruining the looks of the bike. Cruiser derived tourers are sometimes referred to as "baggers" or "fully dressed". 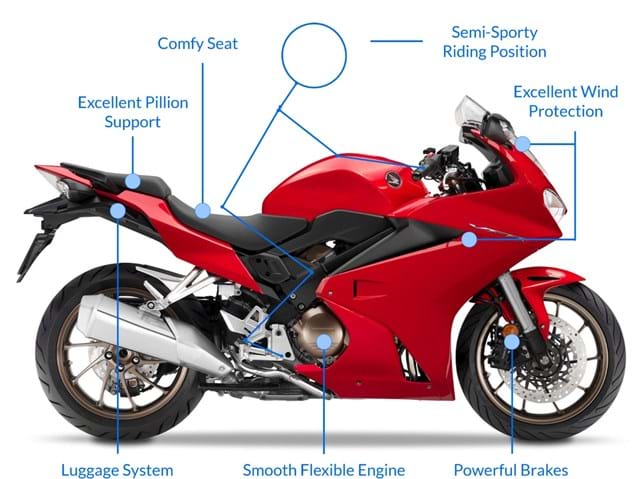 Sport tourers are usually slightly modified high end sports bikes, such as the Kawasaki Z1000SX, however some are designed specifically for the job like the Honda VFR800.

They aim to offer the same capabilities as touring bikes but without sacrificing any of the sportiness in the process, so they tend to be a bit lighter and corner well but aren't as comfortable. 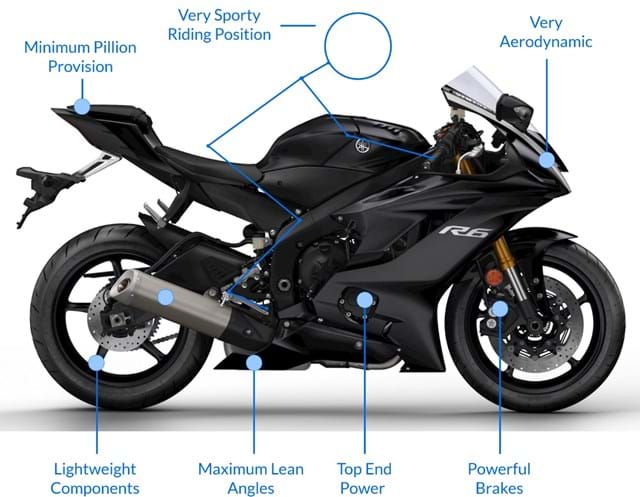 Sports bikes have one goal in mind, which is going as fast as possible from A to B. They achieve this by minimising weight while at the same time maximising power, ideally around 1bhp per 1kg of weight.

They also tend to have a low aggressive riding position, full aerodynamic fairing, state of the art technology and the best lean angle possible for cornering as low as possible.

The most expensive bikes are usually closely related to the manufacturer's MotoGP race bike of the time.

Sales have been suffering recently though because they aren't that comfortable, pillion friendly, economical or really that practical for everyday riding and if you can only have one bike an Adventure or Sport Touring model probably makes more sense, particularly if you won't be taking it anywhere near a track.

The middle capacities, around 600cc, have suffered the most though with the only real option still on sale being the gorgeous Yamaha R6. 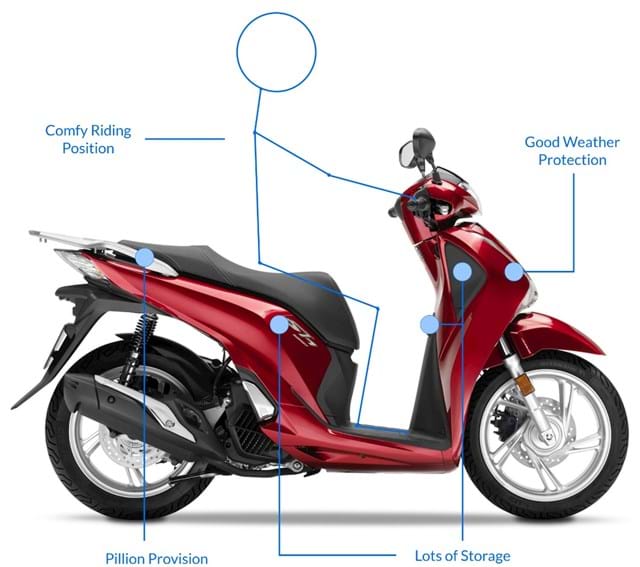 Scooters tend to come in two flavours. First there's the traditional step through design like the retro Vespa GTS125 and modern Honda SH125, which have a flat floorboard and plenty of space to literally step through the frame in order to get on it.

Most have a bag hook in the steering column so it can hang down between your knees.

Check out our top ten step through scooters or all of the scooter models in our scooter chooser. 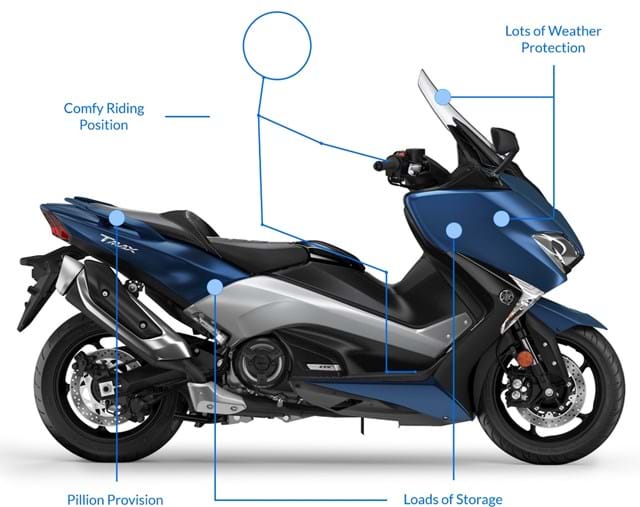 Secondly there is the maxi-scooter design which has more of a solid trunk down the middle of the frame, giving more space for things like the fuel tank.

Maxi scooters tend to have bigger engines, better equipment and be more expensive but all of them feature an automatic gearbox for simple twist and go riding ease.

Oddly enough, given the advantages over traditional motorbikes, they seem to be less popular in the UK but on the continent they can be found round every corner and particularly in the city centres. 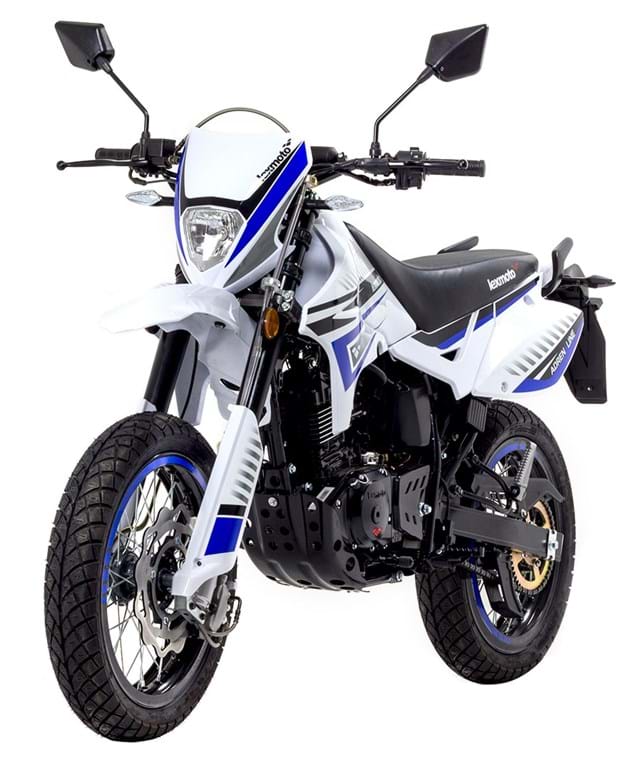 Supermoto bikes, sometimes called Supermotard, are designed for racing on tracks made up of tarmac, dirt and jump sections.

To optimise the bikes for all three they tend to feature wire-spoke wheels, very long travel suspension, great ground clearance, very basic equipment and a noticeable high "beak" as the front fender.

They also tend to be simple single cylinder engines with large wheels and chunky tyres. Check out all of the supermoto models in our bike chooser. 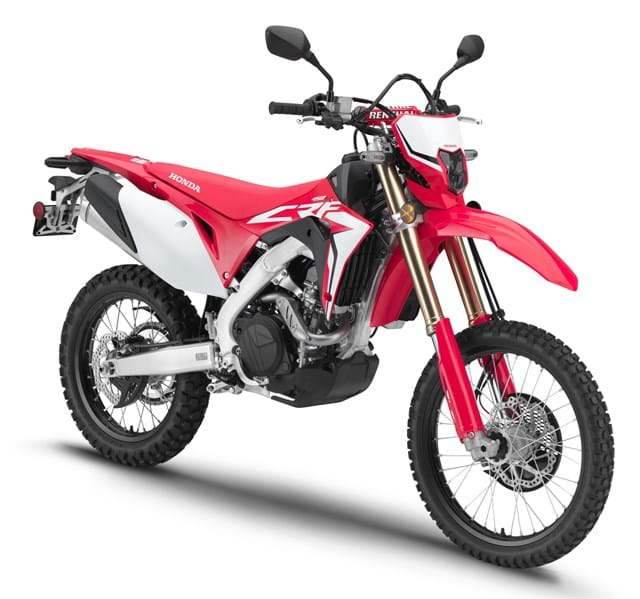 The hallmarks of bikes specifically designed for off-road work tend to be very light weight, wire-spoked wheels, some form of protection under the engine in case of grounding, engine bars in case it drops, long travel suspension, hardly any screen in case you go over the top and usually "knobbly" tyres for improved grip.

They are popular for green laning on public byways / un-tarmacked roads. Check out all of the off-road models in our bike chooser. 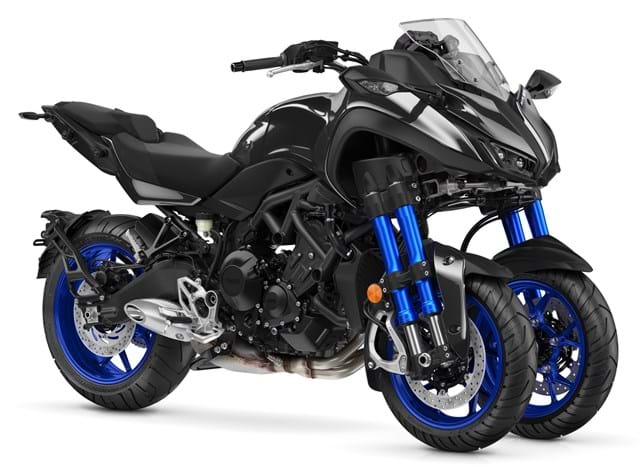 Scooters and more recently bikes with three wheels tend to take an existing model and simply add another wheel at the front.

Both front wheels steer so the advantages include better stability and more grip when cornering however they are more complex and expensive to buy.

Most three wheeler designs allow both front wheels to tilt when cornering and some can even lock in the upright position at slow speeds so there's no need to put your feet down in traffic.

Some models are also fine to ride with just a UK car driving licence but only if their wheels are over a certain distance apart and technically they are classified as a trike.

Generally "trikes" are quite different though and tend to have another fixed wheel at the back, often converted from an existing bike like a cruiser.