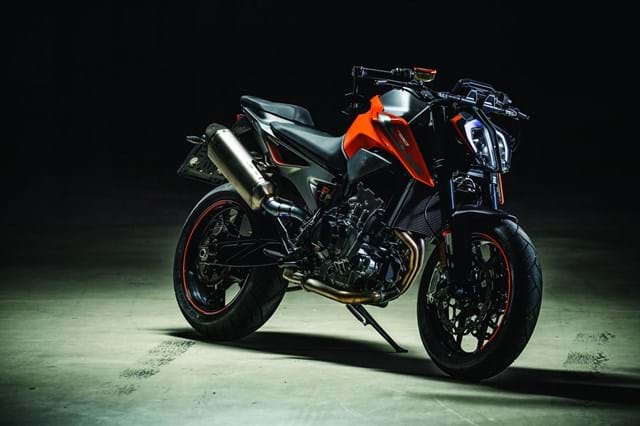 “ It's an attractive, fun and lightweight bike which inspires me to go out in all weathers. ”

The KTM Duke 790 is a middle of the range naked bike and is closely related to the 790 Adventure models. 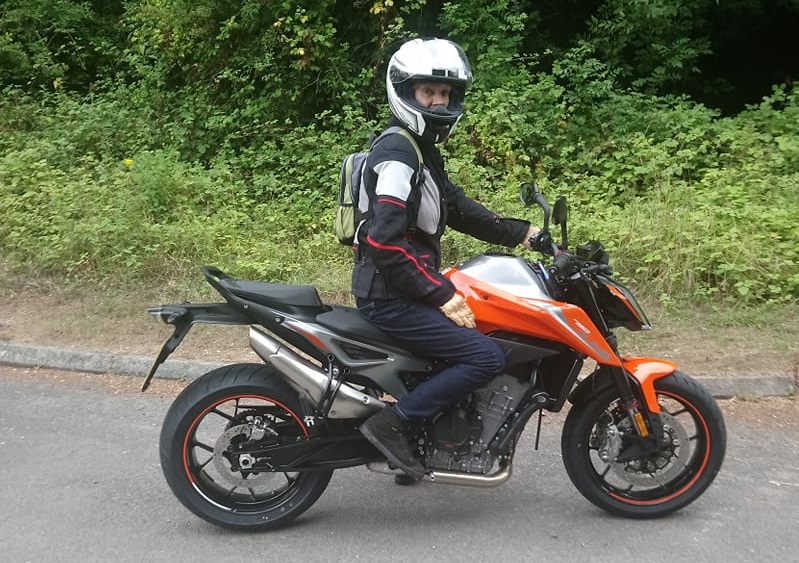 I have always been pillion passenger on motorbikes and have travelled to many overseas countries on bikes. Then six months before I hit 50, and I still don't know why, I booked up for a CBT, went for my licence and I really still can't believe i did it.

This is my third KTM bike. My previous bikes were the 125 Duke and the 390 Duke so for me it was a natural progression on to the 790.

Before that I owned another make but on visiting a dealers on a bitterly cold rainy winter's day I spotted the the 125. For me the colour hit me, the whole fun look of the bike so I bought it on the spot and that is where my affair with KTM started.

As much as I loved the 390 I wanted to have a bike with the capacity for motorway riding and short trips to Europe if I want to go on my own, so this pushed me on again to progress. This bike ticks the boxes and the biggest one is the weight. It's so easy and so nippy around traffic with my commute into the city for work.

As a female rider the low weight of the bike is a big deal for me. It gives me confidence as I'm only a couple of years in, so still learning.

The front light is awesome and looks great. It's so bright I'm easily seen in the dark but I do get flashed as other drivers think I'm on full beam.

I love the overall look and sound of the bike, the handling is so responsive, it's fun to ride, comfortable and it's economical.

The display unit reacts to day and night light levels far to much, unlike the 125 and 390 Dukes, but it can't be overridden. I wish the clock and temperature readouts were bigger as it is hard to see them.

It does get hot on the legs, causing the fan to kick in, but not as much as my previous bikes. My knees heat up if I'm stuck in traffic.

As with all motorbikes heated grips should come as standard because we live in a cold climate.

I've ridden other bike makes in my short motorbike career but for me the Duke 790 is what biking is about. An attractive, fun, lightweight bike.

It inspires me to go out in all weathers and I'm still disappointed that I've reached home - that's how much I love it. All bikes have their good points, bad points and issues but I would still continue with the KTM brand. 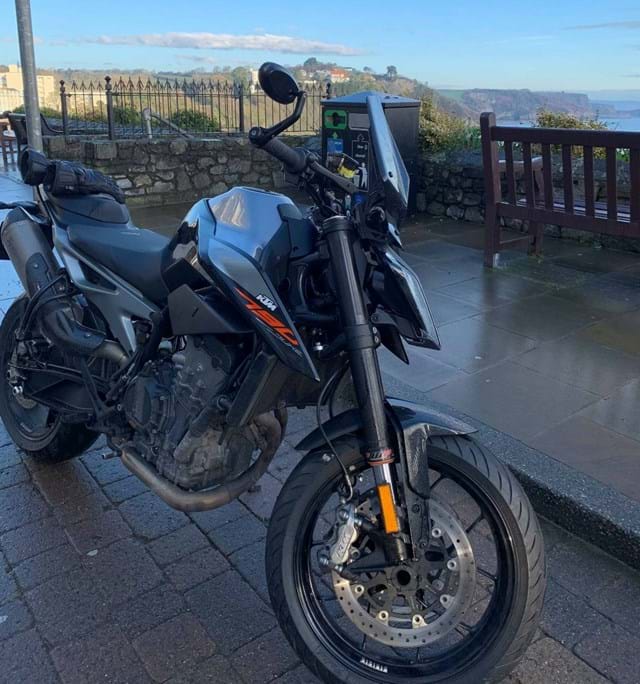 I’ve owned the 790 for around eight months and I’ve done around 5,000 miles on it. I have to say it has exceeded my expectations at every turn. Perhaps the most amazing thing is that this bike is my first. I passed my DAS test last summer and I rushed out to buy it, having researched it first and found it to be the best bet.

I bought it because of the value it presented. I could not find a bike at this price point that was so easy to ride and came with so much safety jiggery-pokery.

I test quite a few bikes, including the amazing Kawasaki Z900RS, but found the KTM was so easy to ride in comparison it's not funny.

While I am yet to test the bikes lean sensitive traction control, the ABS has helped out a few times. I’ve also progressed as I’ve gained confidence and the bike has matched me step for step. It's default is Sport mode, but during the drier weather it was permanently on Track.

The bike feels extremely well put together with the fit and finish first class, even 5,000 miles or so later. The only maintenance so far has been the regular chain cleaning, the application of ACF-50 a couple of times through the Winter and a warranty fix for some water that was pooling in the fuel cap. Apparently a kink in an overflow pipe was to blame but it was replaced without issue.

The first service was fine and I rode the Maxxis tyres until I couldn't get a drop more from them, before replacing for the Michelins.

A quick note on the Maxis rubber. In my limited experience I didn’t feel a lot wrong with them. I’m a new rider and so perhaps I wasn’t pushing the bike too much, but I have noticed that the additional confidence from the Michelins is remarkable. So I would advocate changing as soon as practical. 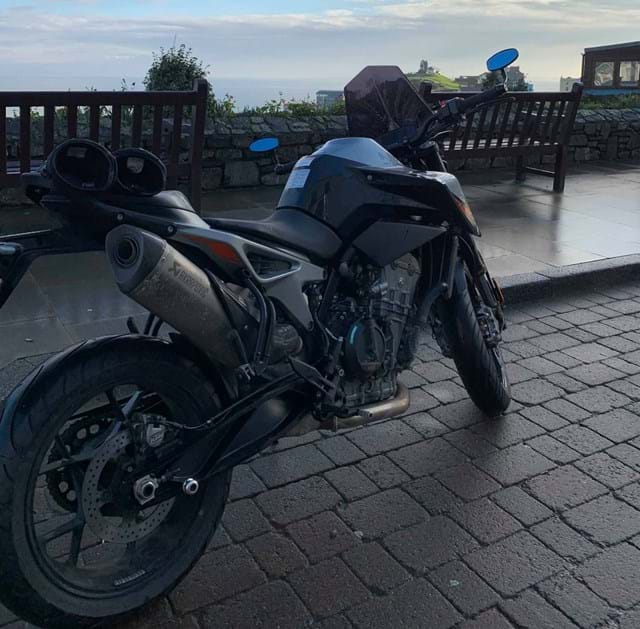 The thrill from the noise of the exhaust to the urgent acceleration is awesome. More awesome is the fact the bike never seems too troubled with corners. As I gain confidence and push it faster, it just grips and grips, especially since the addition of Pilot 2’s.

Talking of the exhaust, my main ‘mod’ was the addition of the Akrapovic end can. While it looks great, I genuinely think the difference between the sound on the Akra and the stock can is minimal. Both sound amazing, especially on the over run.

I’ve also added a small Puig deflector screen to the front that will come back off when the weather improves. It doesn’t look great, but it does a good job of shielding me from the wind.

The bike is completely comfortable up to and past motorway speeds. The wind isn’t really an issue until around 60, though it becomes more so as you get faster. The bike on the other hand responds in a surefooted and confidence inspiring way all the way up to the speed limit.

I’m just over 6 foot and so the height of the bike was a draw too, as I dislike the sensation of squatting on my bike. The 790 is comfortable as hell for at least an hour and I regularly ride for 90mins or so before taking a break to stretch it out.

Fuel consumption is great. I basically fill the tank each time I go out, which is about £12 and get a good 150 plus miles on a run.

The only real issue I have with the bike is the suspension. I’m a heavy guy as well, but I find it’s a bit soft and bouncy at speeds.

Pushing on when riding A roads with challenging surfaces and hilly bits can leave you feeling a bit sea sick. The bike seems to handle it all okay though.

I’d have one again and I might even look at the Adventure version. Though I’ve also got my eye on the bigger 1090 Adventure for next time too! 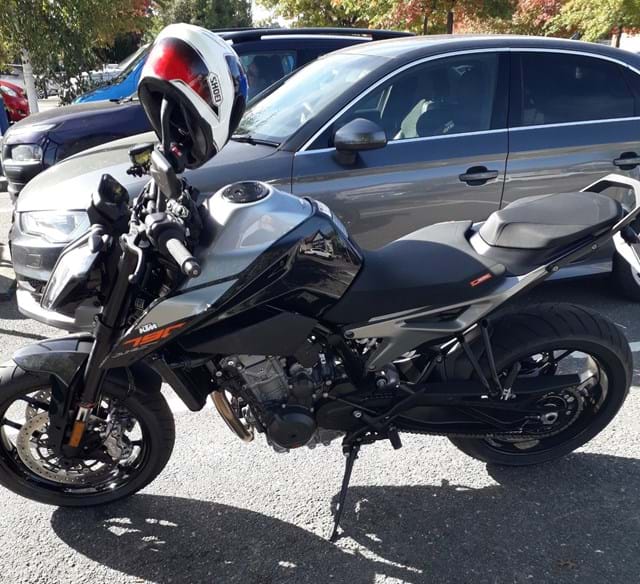 I've had countless bikes over the last 40+ years and most have been sportsbikes but I've decided to 'go naked'. I've also had the lovely retro XSR900, but fancied a change.

It's very different to the XSR and I wasn't sure at first, but I got such a good deal on one that I took the plunge.

The R&G tail tidy and the 'Ergo' comfort seat. I'm also having KTM heated grips and Oxford handguards fitted but I went for the black option as think it looks classier.

Check out this video review from 44Teeth.