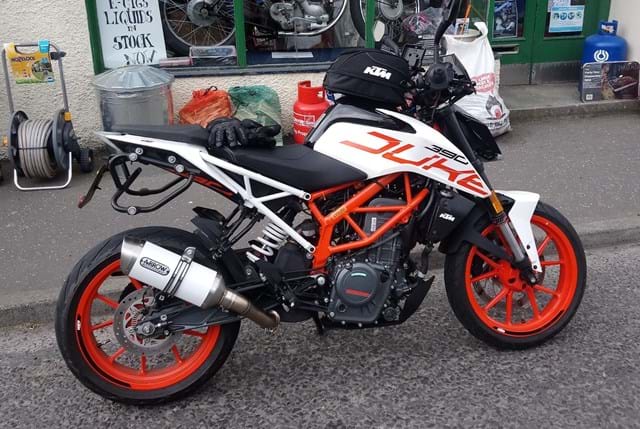 “ It's light, manoeuvrable, has a good turning circle, holds the road well and has good enough performance to suit UK roads. ”

The KTM Duke 390 is an A2 licence friendly naked bike which was first launched in 2013 and which saw a major update for 2017 with a colour TFT dash and LED lighting. 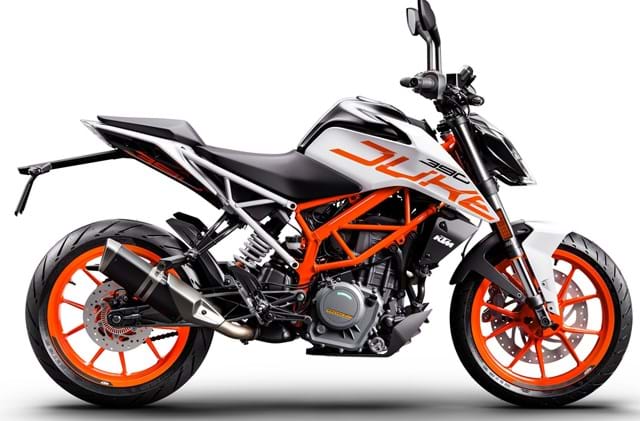 I’m probably not a very typical Duke 390 owner. Judging by the various online forums their owners mainly seem to be young people of both sexes, relatively new to motorcycling and perhaps ‘working their way up’ to bigger bikes.

I actually ‘worked down’ from a Ducati, being attracted to the bike by reviews describing its lightness, agility, performance and relatively low price. It also appealed to the hooligan in me with its lines and finish and I opted for the white version.

As a very young 64 year old I have owned many, mostly British, motorcycles over the past nearly 50 years. They weren’t classics back in the day! However I’m still in awe and a bit scared of the performance of big bikes that started to come onto the market in the 1970s, so certainly wasn’t looking for anything that could do twice the national speed limit. This is the first new bike I have ever purchased.

How I Ride It

After a wait of about two months I collected the bike from Portman’s in Glasgow. I have now owned the 2017 bike for a year and put on about 3,500 miles. Most of this has been long runs of 150 miles plus and I don’t use the bike on a daily basis. I have done long motorway journeys as well as twisty local back road runs up Scotland’s west coast.

It's light. I could pick it up without breaking myself if I should ever drop it and manoeuvrable with a good turning circle. It holds the road well and has good enough performance to suit UK road conditions and speed limits. You could easily cruise at 80 plus and still accelerate up to over 90mph.

I have little desire to find out the top speed though and going by the very useful colouring of the rev counter 90 plus is approaching the red line at 10,000rpm.

I love the dash unit with all the information it gives the rider and its ease of use although some of the figures are too small to pick up with my ageing eyesight when riding. I have never had the optional Bluetooth device fitted and can’t see why I would want to.

It comes with a good toolkit that just about fits in under the seat and a comprehensive handbook. No idea about fuel economy but the tank is good enough for 150 miles or so.

I haven’t had any but have read of others having electrical issues. I got it serviced by the dealer at 600 miles and will do so again soon. It's due after a year or 4,650 miles to maintain the warranty. I changed the oil to 15-40 Putoline Sport4 and filters as Summer began at 1,641 miles.

I ordered the bike with a ‘touring set’ comprising the ‘ergo’ seat, panniers and fittings to the frame plus a small tank bag. The panniers are fairly small, lock on and are easily detached: good enough with a backpack for anything short of a full camping trip.

The tank bag is useful as it is big enough for a rainsuit, which is very necessary in the West of Scotland and it detaches very easily for tank filling.

I also fitted an R&G tail tidy because I didn’t like the projecting tail and a white Arrow exhaust.

I have also fitted a KTM flyscreen which has been disappointing. It's tiny but does stop flies and protect the dash unit, however does little to prevent wind pressure at high speed. I might get a bigger one as these are now available.

I have also added leads from the battery for a mounted Sat Nav and separate USB power outlet. I keep it clean and check chain lubrication etc after every run.

A fabulous all round bike and definitely to be recommended. I love it and plan to keep it for a while with no plans to ‘step up’. Been there and done it! 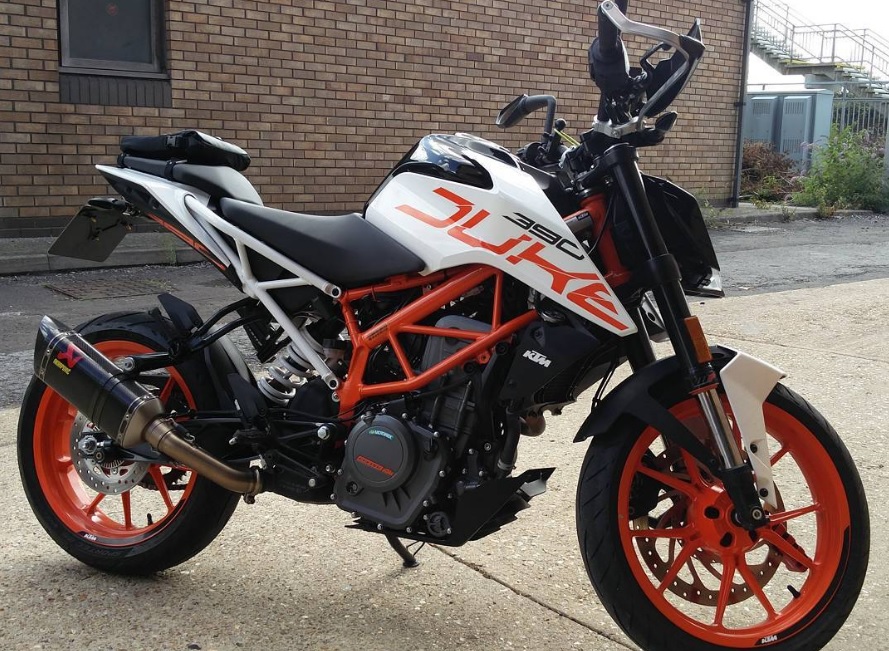 I've owned my KTM Duke 390 for almost a year and I was told that it was the first white registered model in the UK. It was purchased from Jim Aim Racing in Braintree to which I had sold my previous bike, a Gen 1 KTM Duke 125, which I rode for 18 months on a CBT.

I am a maturer rider by age at 38 years old and I got into riding to save money on my commute, but I have always had an interest in motorcycles and followed motorcycle racing since I was a child.

I chose KTM as it is a little different from the main stream manufacturers and when getting into motorcycle ownership Jim Aims steered me in the right direction and has been really helpful.

They are a real credit to the franchise and motorcycle community, part of the criteria I set myself. I wanted an MX5 of the bike world and I've found it.

Now To The Bike

I purchased it with an Akrapovic slip on exhaust, which sounds great with the DB killer removed and KTM Aluminium hand guards. I got through my run in period in a month and most of my riding was commuting, regardless of the weather I would be on my bike.

I squared off the rear tyre in 3,000 miles. When I took it back to the dealership to change and have heated grips fitted they updated the firmware for the headlight. There had been reports of the headlight dropping out for a moment.

I absolutely love the bike, considering it is a small capacity bike it performs really well. I live in the countryside where you cannot really get over 50/60mph so it is ideal, the bike pulls strongly up to those speeds and is really enjoyable on the twisty roads. I have done some duel carriageway riding and it can comfortably do 70mph, even I suspect up to 80 if needed.

During Winter riding the headlight is brilliant, I would go as far as saying its better than my car headlights. I have booked in for my next service as I have just cleared 4,000 miles.