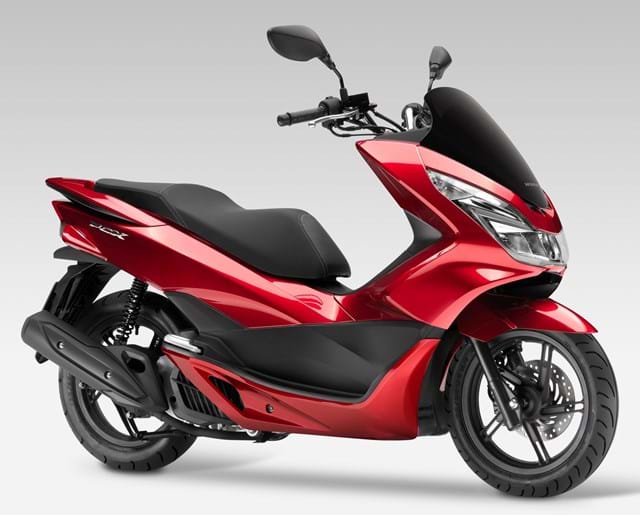 The Honda PCX125 is a mid-range maxi scooter which often tops the sales charts and is powered by a Euro 3 compliant 124.9 cc single cylinder engine, producing 11.1 bhp at 8,000 rpm.

Compared to the 2012-2013 model the start / stop fuel saving system has been upgraded to monitor the charge level from a new larger battery and now turns itself off if the drain would be to high. It can also be deactivated by a switch on the handlebar if needed and cuts in after three seconds when active.

Fuel capacity has been increased to 8 litres, the lights are now all LED based and Honda added a 12V adaptor for phone charging to the now larger left fairing pocket. There's also a USB socket in there for your phone.

Elsewhere the bodywork is brand new, the passenger backrest has been removed to streamline the looks, the seat features a sprung hinge so that it stays up once open and there is now a clock. A tight two meter turning radius makes it easy to handle in tight spaces. The 5-spoke 14" wheels take a 90/90 tyre at the front and 100/90 at the rear.

The PCX125 is the best selling scooter in the UK and sometimes called the WW125.