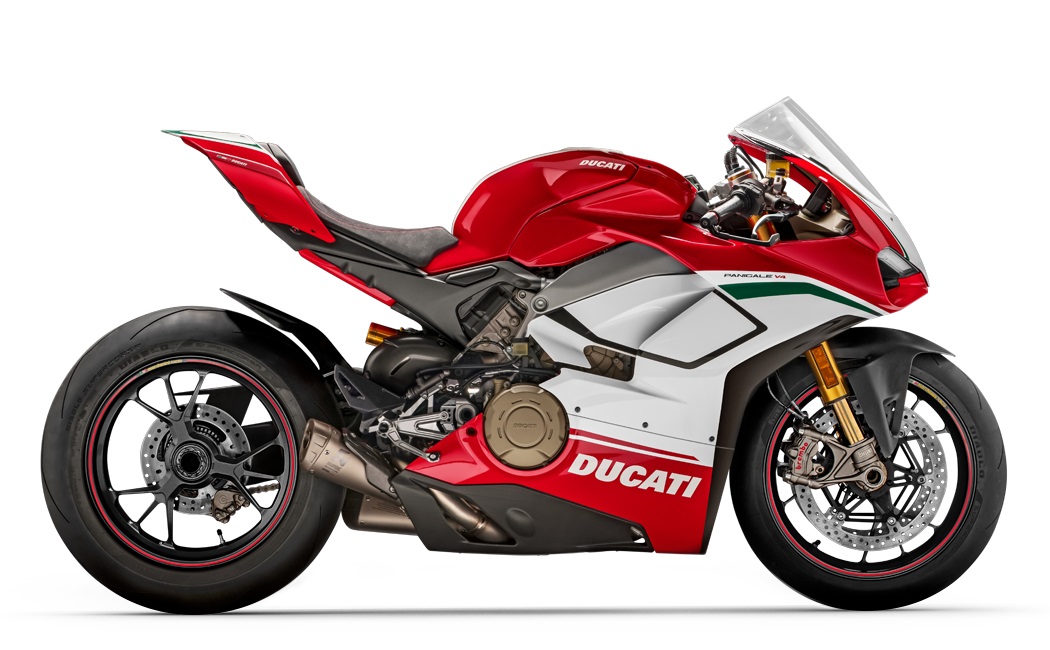 The 2018 Ducati Panigale V4 Speciale is a premium sports bike and is basically the V4 S but with the parts catalogue thrown at it.

If you have a £35K budget and want a Ducati V4 for road use, forget the V4 S or the V4 R versions and get yourself the V4 Speciale. Why, because you can! It's basically a V4 S that's had the Ducati Rizoma and carbon fibre accessory book thrown at it and it looks absolutely amazing in the tricolour paint scheme.

It's one of 1,500 limited edition models worldwide and comes supplied with the full Akrapovic titanium race exhaust system.

An option at order time is the additional cost of £4,000 for a set of magnesium wheels, just in case the standard black forged Marchesini set aren’t enough; but beware, they don’t come with tyres, discs or ABS ring at this price and if you thought about having a spare set of wheels ready to go, you better get a bigger wallet.

Versus The V4 R

I opted for the Speciale instead of the V4 R as I intended riding mine more on the road than track. The power curve on the Speciale is setup just for that.

With quicker torque and power delivery low down, almost 20 bhp more mid-range over the V4 R and with handling round corners that I can only compare to the flickable and nimble RSV4 Factory.

It beats the V4 R round the twisties hands down and with the full electronic suspension, it just soaks up the lumps and bumps on British roads.

If you want top end speed only, then go for the V4 R but don’t think you’ll be able to use it on the road, because the V4 Speciale runs out of tarmac soon enough with only 226 bhp and a speedo showing triple digits within only a matter of seconds and under 7,000 rpm in 6th gear too.

The V4 growl from the Akrapovic exhausts on tickover sounds sweet and isn’t too intrusive, but get the bike on song and it's an absolute banshee.

The bike red lines at 15,000 rpm, although I'm really not sure how many riders will ever achieve that on the open road. The pops and bangs on clutchless upshift and downblip are a pure delight and enough to make you change gear just for the sake of it.

Stop the bike in traffic though and it wont be long before the fans cut in and your legs, thighs and buttocks start to cook. The V4 motor runs very hot indeed and doesn’t like to stand still for very long.

Once you're moving again, you wont be able to see much in the mirrors without impersonating a flapping chicken but even then they don't provide a clear image of whats behind you.

It's very easy to get carried away on this animal and in the wrong hands could get you into all sorts of trouble, including the law.

That said, it behaves very well around town depending on what settings you have as you can adjust engine braking, power and throttle response through the three available maps.

The only downside to this bike is the 16 litre tank and range. Ride it hard and you’ll have the fuel light coming on as soon as 65 miles from a full tank. The reserve light does come on a bit early which isn’t a bad thing as you have approximately 25 miles left in the tank before you find yourself pushing it to the closest forecourt to fill up with 95 RON.

Ducati do not recommend using 97 RON with this motor, even with the Akkies fitted, which is a big surprise but apparently they don’t like the superplus stuff.

Get home and think the excitement has finished? Think again! Get off the bike and you just cant stop looking at the attention to detail, exotic parts and the shear beauty of this machine.

What's even harder, is walking away from it trying to look forward.......but you just cant help yourself having just one more look. The Speciale really is that Special.

A typical insurance quote with tracker fitted for a 47 year old male with 4 years NCD can be found for around £1,000 fully comp, which isn’t that bad in today's climate for a £40k bike.

Ducati V4 S - Mid-range model the Speciale is based on with a lightweight battery, forged wheels and Ohlins electronic suspension.