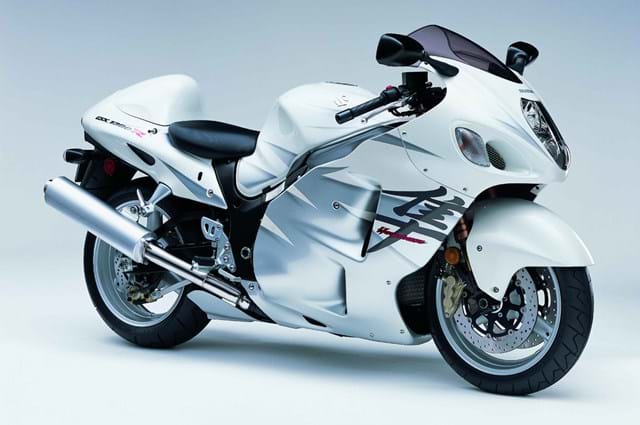 Suzuki used their World Superbike experience to develop the frame, swingarm and low drag coefficient of the bike. The curves and hump at the back work with the riders body to let the bike slip through the air with minimum turbulence, while the vertical stacked headlights provide a very narrow front end.

The end result swooped in and stole the title of fastest production bike from the Honda CBR1100XX Super Blackbird, shortly before the gentleman's agreement between the main players to limit top speeds to 186 mph in 2000.

Kawasaki's ZX-12R was also in the running for the title but the Busa won and became the fastest motorbike of the 20th century.

The 隼 Japanese symbol on the side means Peregrine Falcon, which are known for their circa 200mph vertical dives while hunting blackbirds and it's also known as the GSX1300R.

1999-2000: Unrestricted and can hit 194 mph rather than the restricted 186 mph. This makes them slightly more collectable and as such they hold their value well.

2002: Limited edition Midnight Falcon celebrating over 12,000 Busas sold in the USA. It was basically the same as the the standard bike but featured a black painted frame and swingarm.

2007: Move from two tone colours towards the solid colours usually found on the limited editions.