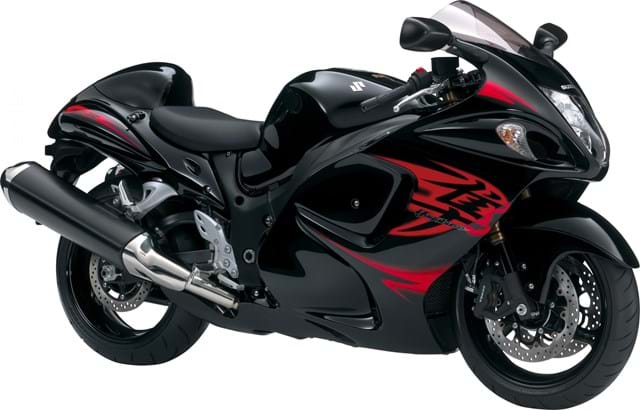 The Suzuki Hayabusa is a popular premium sports tourer and is powered by a Euro 3 compliant liquid cooled 1,340 cc inline four engine, producing 194 bhp at 9,500 rpm and maximum torque at 7,200 rpm.

Engine capacity, torque, power, brake performance and aerodynamics are improved over the 1999-2007 Busa. The new engine sees a complete overhaul including lighter Aluminium pistons, Titanium valves and lighter cylinders. While the new bike is a couple of kilos heavier it has an improved power to weight ratio.

Finish quality has been improved, the screen is 15 mm higher and the rear end sees a cosmetic re-design. The frame is now painted black, which was reserved for the special editions on the old model and to improve the looks Suzuki moved the rear caliper to the top of the disc so that it's hidden behind the muffler.