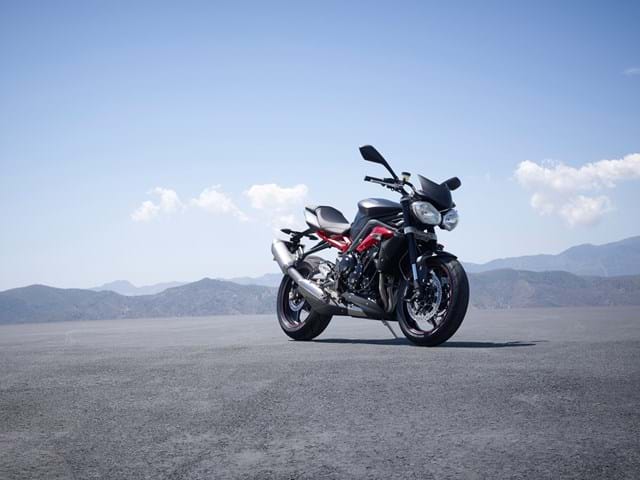 The 2012 Street Triple R is a naked style bike which was first launched in 2009. 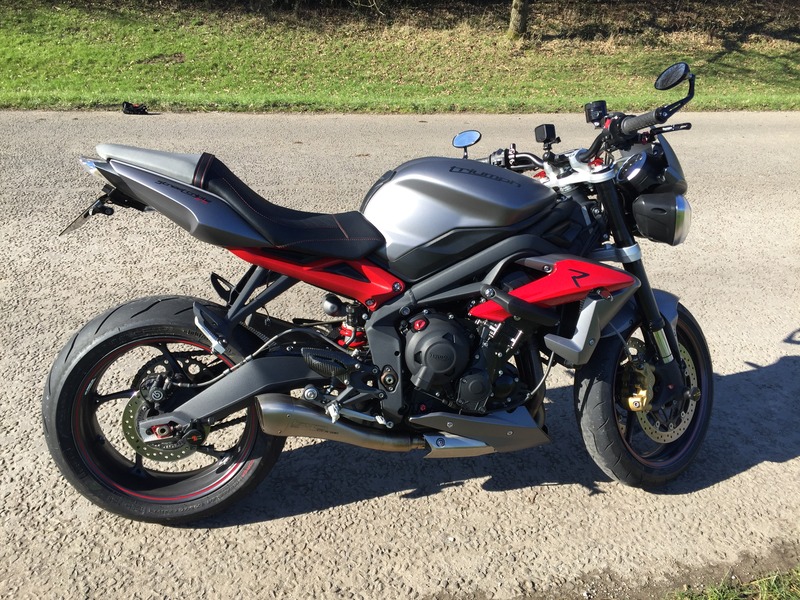 The clocks on the 2012 onwards bike have a built in lap timer, clock and more importantly a fuel gauge which wasn’t present on the earlier 2006-2011 bike.

The blue LEDs on the top of the clocks can be set for rev limit either stable or incremental and in adjustable rpm increments.

The quickshifter is a genuine bolt on from Triumph for £295 which is manufactured by Translogic. It's a plug and play item from 2009 onwards, plugs in directly beneath the tank and allows full throttle or part throttle gear changes without backing off.

ABS was an option in 2013-2014 and is now mandatory but is switchable. Once turned off it will auto re-arm upon ignition switching.

The bike comes with braided lines as standard and providing the calipers are kept in good order the brakes on the R, Nissin 4 pot radial front brake calipers and a Brembo rear, are as good as anything else on the market and are remarkably strong. 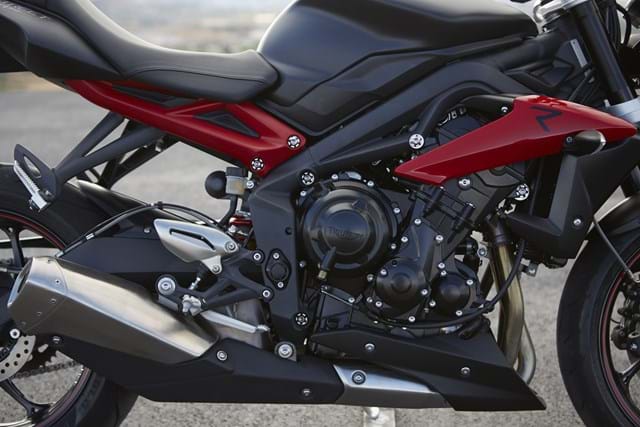 The bike comes with Pirelli Diablo Rosso Corsa tyres which although expensive are brilliant in the dry but not too complimentary in the wet and a favoured tyre would be something like M7-RR Metzelers or Michelin PR3 or 4’s.

The 2006-2011 bike can be set up for modified fuelling using a piece of free software called Tune ECU but Triumph locked the ECU down from 2013.

It is supposed to be Dealer only for the Arrow map which works out around £35 for the remap and it does make a difference in the way the bike behaves with an open pipe. It doesn’t necessarily have to be Arrow.

The bike could do with a front mudguard extender as it is quite short but more importantly it could do with a radiator guard (from £39 on an internet auction site) as the radiator is silly expensive and very exposed.

Bar end mirrors are better than standard ones and you can buy these from £10 a pair from China or £180 from Triumph for branded ones.

Standard cheap master cylinder fluid pots look cheap too but can be replaced with genuine Triumph items from around £120 the pair of £30 from that same auction site.

Triumph aftermarket adjustable brake and clutch levers cost circa £185 a pair but can be bought on the same auction site once again from £30 for CNC levers.

Triumphs own engine protection covers are around £135 for the set but changed in 2012 so make sure you buy the correct ones as they have now been superseded and the frame protection will stop damage a little higher up (£130).

Triumph LED indicators are around £30 each, require the correct flasher relay to get the flash time correct and are actually made by Koso in the Czech republic and sold without the branding for around £18 each.

The Speed Triple throttle tube can be fitted to give a quicker action throttle. 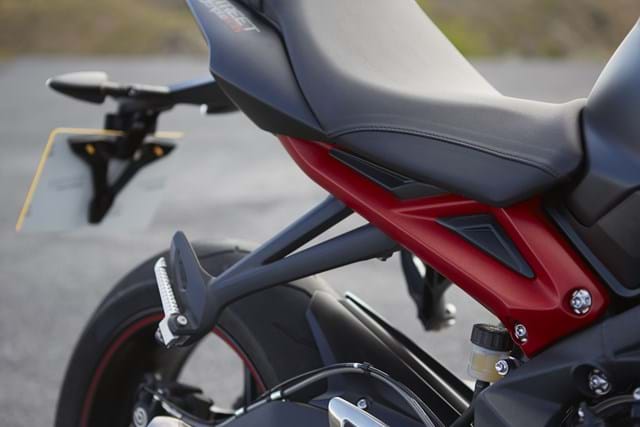 Daytona seat plastics etc can be fitted with minimal work to give the same look as the RX and Daytona rearsets are a direct replacement which take your feet back around an inch and make the bike feel a little more sporty. 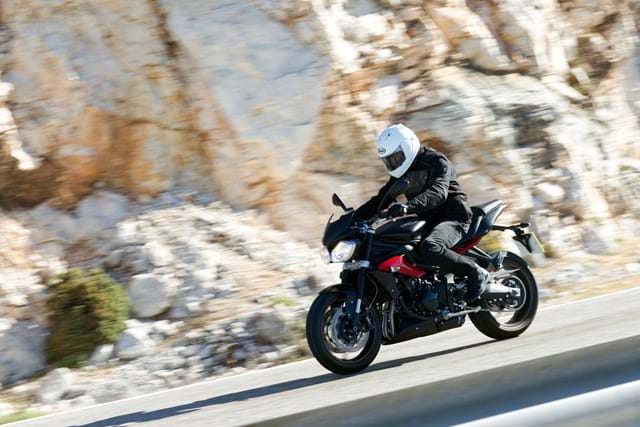 Owners should also obey the owner's manual and shut the bike down with the key not the kill switch as Triumph state that this is an emergency switch and should only be used as such.

This can cause strange electrical issues as the bike goes through a shutdown procedure when stopped on the key and you can hear this happen around 30 secs after.

Earlier 2012 bikes with the new ‘Dame edna’ look headlights could suffer from headlamp lenses cracking but most were replaced under warranty.

One last thing, the rider does tend to get a wet back when riding in the rain and the hugger doesn’t do much to help this although most people fit a tail tidy which just makes it worse. 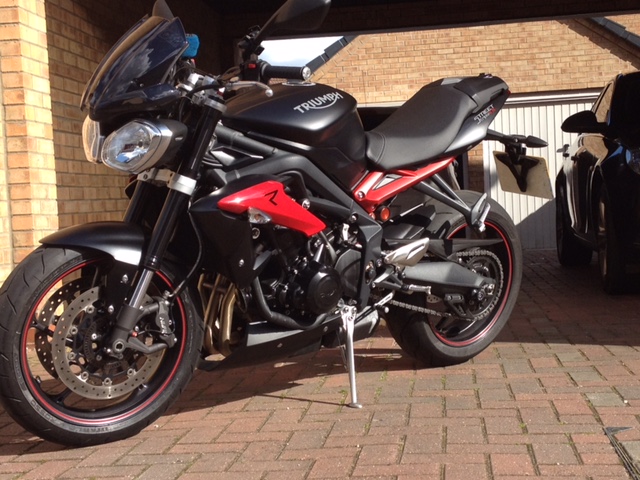 I decided to have a complete change of bike type and I loved the Triumph Triple engine in the Daytona R so decided that the 2014 Street Triple R was for me.

Whilst not as powerful as the Daytona you could argue it doesn't need the extra power. With the straight wide bars the bike becomes a BMX with an engine. Every time you ride it you feel like a kid and want to pop the front wheel in the air or do a stoppie. Just remember to turn off the ABS.

Just over 100 bhp never felt so much fun and every gear change is through to the redline. It's maximum attack 24/7.

The R gets the adjustable suspension and brakes from the standard Daytona. Bends are reduced to mere kinks in the road and roundabouts are like being on a fairground ride. If you crash one of these then you must be riding like a tool.

A low seat and high bars make it very comfortable yet ground clearance is superb. The seat should be big enough for easy two up riding and it's very easy to attach luggage.

It's not the best looking naked bike, the fly screen is a must and if possible get the additional screen fitted as the option to the Speed Triple.

For smiles per mile, there is no other bike I have come across that can provide it. Triumph should offer a slightly more hardcore version with about 125 to 130 bhp. This would be a fantastic option.

Test ride one, you won't be disappointed whether you are a seasoned rider or a newbie. The little Trumpet makes biking fun and surely that's what it is all about.

Check out this four year video review from TheMissendenFlyer.