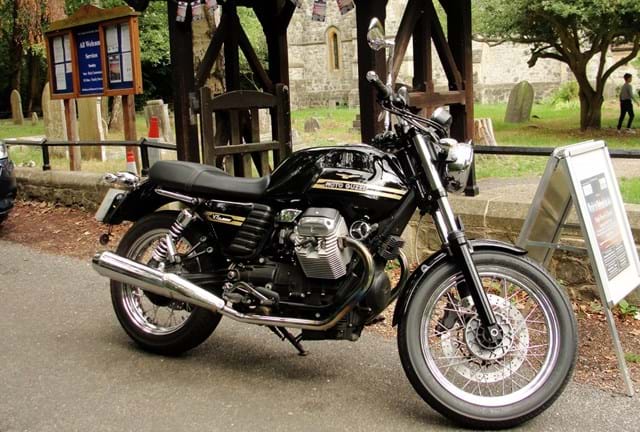 The first iteration of the retro Moto Guzzi V7 launched in 2008 and is powered by a transversely mounted V-Twin. It saw a major update in 2010, has a shaft drive and is available in a number of flavours.

A long time ago, when I was young, on my journey to work I was passed regularly by a guy on a Moto Guzzi California. I’d always admired that bike, the comfortable looking seat with the chrome grab bar around the side, the ammo-box style panniers and the sound of the V-twin engine. However I was unable to afford one. Years passed, and I stuck mostly with Japanese bikes.

My last bike was a 1999 Suzuki GSX750F, which I had owned for 17 years. I loved it dearly and it never missed a beat, but I was beginning to find that it was no longer fun to ride in London traffic.

It was a combination of things, weight, size, the riding position and I was getting back pain. The final straw was the impending introduction of the London Ultra Low Emissions Zone (ULEZ), which the Suzuki would not be able to meet, being built pre 2006.

I began looking for a replacement. My requirements were that I wanted something suitable for London traffic, light and agile, yet robust enough to cope with longer journeys, possibly touring.

I remembered seeing a Guzzi V7 Stone in my local bike garage, but by the time I went back to look at it again, it had gone. I also considered more retro styles like a Triumph or Royal Enfield, but I kept returning to the idea of a V7.

After much searching on the internet, I finally I found a 2010 Moto Guzzi V7 Classic with 3,500 miles at Churchill Motorcycles, Potterspury.

After being used to a sports-tourer with a full fairing, the naked Guzzi feels small. However the low wide seat is comfortable. Controls are within easy reach of its sit-up riding position.

Initially the mirrors seemed very high, but once adjusted correctly, they give good rear vision. The instrument panel consists of the speedometer (left) and rev-counter (right). Both clocks also include digital displays, miles/trip on the speedo and clock/temperature on the rev counter. Above the dials is the usual array for check lights (oil, petrol, indicators etc.). One criticism of the speedo is that the numerals are slightly on the small side, and can be difficult to read.

Turning over the engine results in a satisfying chug-chug-chug from the twin exhaust and some vibration while the bike rests on its side stand. This regularly ends up with my gloves falling off the seat. Don’t let this happen to your helmet!

Open the throttle slightly, and the bike begins to pull to the right, which is one of its characteristics. In the early days I found it to be tricky switching to first gear from neutral while the engine was cold, but with time, this has become smoother.

The V7 Classic has EFI, is Euro 3 compliant, and meets the standard for the proposed London ULEZ. There is a very supportive V7 UK group on Facebook which regularly arranges ‘meet-ups’.

Once in motion, the vibrations vanish and the chug becomes a roar at higher speeds. I mainly ride for commuting, and the V7 Classic is ideally suited, being small and light enough to manoeuvre easily through the dense London traffic.

The steering is light and responsive. The rear suspension is quite hard, so you can end up ‘experiencing’ all of the city’s pot holes and road humps. During the Winter months the cylinder heads provide extra heat to the knees!

The bike is happiest on A-roads where it proves to be a relaxing ride, with its five speed gearbox. The engine provides 48 bhp, which doesn’t seem much these days, but is capable of keeping up with most traffic on motorways, although you can end up suffering from the wind blast due to lack of protection. Having a shaft drive reduces the maintenance, and keeps it clean.

I’ve had no real problems in the year since I’ve owned it. I once had the dome nut holding the front indicator bracket in place vibrate off, but was easily replaced from the local DIY store.