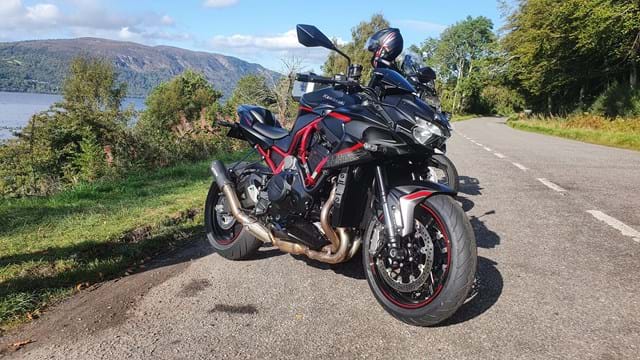 ‟
The Z H2 is a true 200 bhp rocket ship that offers the confidence to be ridden by a novice. A engineering masterpiece that Kawasaki should be proud of.
”
- Rating: 10 / 10

The Kawasaki Z H2 is a premium naked bike and is powered by a supercharged Euro 5 compliant liquid cooled 998 cc inline four engine, producing 197.3 bhp at 11,000 rpm and maximum torque at 8,500 rpm. Ram air adds another 10 bhp on top. 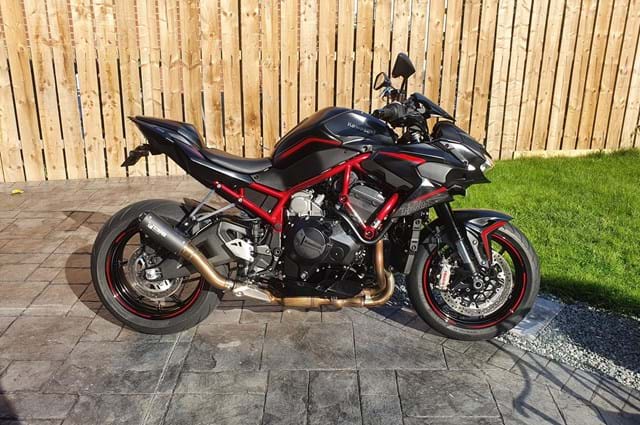 It would be nice having wheelie control alongside the traction control like my Tuono.

Heated grips should be standard or at least a reasonable asking price, not £400 fitted.

The stock seat is a little too thin.

One of the best bikes for economy that I've owned. Cruising motorway you will see 150 miles to a tank before reserve. Fun twisty roads you will get 120 miles.

I've upgraded to the comfort seat, which is a big improvement with only a slight gain in saddle height. It makes 8 hour rides more comfortable.

A DNA racing air filter for more noise and power gains to go along with the Scorpion red power exhaust, which removes the second cat and also helps shave 8 kg of unnecessary weight.

I'm planning the ECU remap to 240 bhp at the wheel next year along with an upgraded performance rear shock.

This engine is a masterpiece. You can pull away in 6th at 30 mph without it hesitating. It has the same low down grunt as my 2020 Super Duke R. The same mid range as my 2019 Tuono Factory V4 and the same searing top end power of the Ducati Streetfighter V4.

Power is almost instant like an electric motor and it builds with very little friction getting in the way. There's sufficient engine braking when coming off the gas, without it being too intrusive.

It's worth revving higher for more power as it's very rewarding and not making you want to short shift all the time. Midrange grunt is the party piece.

On the road absolutely fantastic. It soaks up bumps and imperfections on the road very well which makes it a great cruising machine. It makes my 2020 Super Duke R feel harsh.

There's enough adjustment in the suspension to dial in fast road handling if needed. I've lost traction 3 times on the rear when powering out of a corner, mostly due to the extreme power and the road conditions. An improved shock wouldn't have prevented this.

The bike's extra weight helps it feel more plush on the road, like driving a posh German car over a cheap French one.

I've never got myself into trouble on the corners with this bike. It always goes where I tell it to go and can hold a line perfectly either when going fast or going slow.

I did some back to back testing in the Cairngorms with my 2019 Tuono Factory and the  H2 impressed me with how well it performed A to B against the Tuono's electric Ohlins.

It doesn't squat too much under acceleration and doesn't dive under braking. I've never felt it understeer and the front feels very confident.

I might try some S22 tyres next time around as I'm very confident on them being sticky from my Super Duke R. 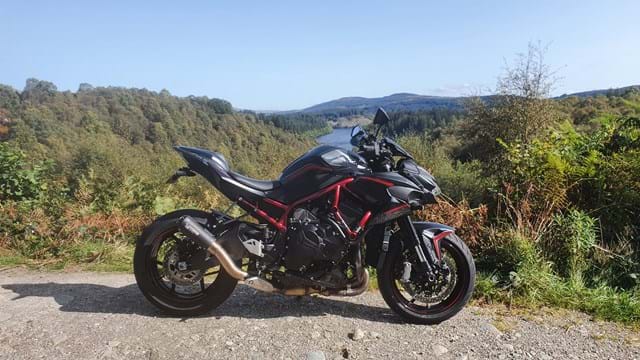 They are more than adequate for the bike's power and weight for fast road use. Almost over engineered.

I've never had brake fade and I like to trail brake often. The few times I've had to brake very hard the bike slowed down without drama, with the ABS bringing me to a safe speed without feeling it intervene too much. The rear brake actually works, unlike some bikes.

There's a smooth action when applying pressure to the front. The bike can feel like it'll almost flip itself if grabbing a huge handful as there's just so much braking force and grip in the tyres.

I was getting an aching bum after 2 or 3 hours on the saddle over fast Scottish country roads. I'd need to fidget and try work off the numb bum.

The problem is the foam is quite thin where the plastic bungs are located, just beneath the pointy bits of your bum. I changed it to the comfort seat and it's a world of difference. No aches at all after 8 hours of fast riding.

I did have to get used to the different angled handlebars compared to my other bikes. They seem a bit more curved than flat but once used to them it has never been a problem.

I've got slipped discs in my lower back and a fused disc in my neck. Often I get aches and pains sat on my sofa or car or on other bikes like my RSV4 or even my Tuono (until I raised the handle bars) but on the Z H2 I've never had any problems with my back, knees or wrists. My knee position is relaxed but it sacrifices ground clearance for maximum lean compared to super sports bikes.

I've not had any problems to date. The bike had its first service done at 600 miles, has always started and never had a problem to report.

Dealers are willing to negotiate on servicing. I paid £120 for my first service at the dealer I bought it from and he offers discount on parts.

600 miles is the first service then yearly after that. Reasonable future service costs considering its got 200 bhp and is supercharged. It's about £20 more expensive to service compared to a ZX-10R and no more expensive than other bikes it competes with.

I've owned all the super nakeds of late and I've test ridden all the bikes that I refused to want to own.

This is a clear winner in my eyes. A true 200 bhp rocket ship that can offer the confidence to be ridden by a novice. It can blow your socks off giving the beanstalk and can offer real comfort when others will cripple you.

It has the performance to keep up with and excel against the competition on the road. The Z H2 has so much character that I want to take it out over the other bikes in my garage.

A true engineering masterpiece that Kawasaki should be proud of. There's nothing else out there that can offer this unique supercharged performance like the Z H2. It sounds immense with the Scorpion when accelerating and the chirps of the supercharger when coming off the gas is addictive. 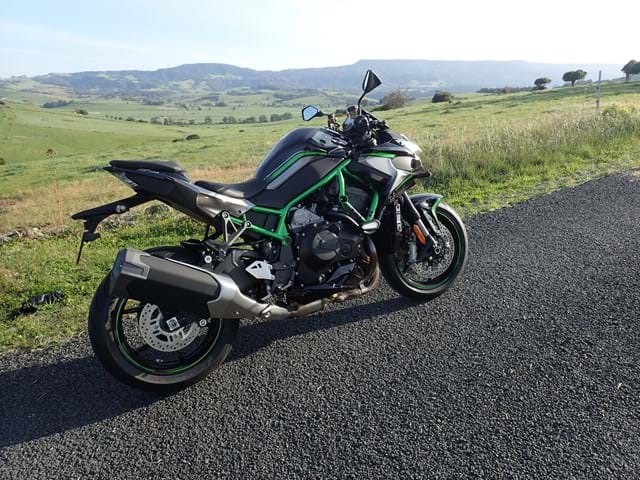 Having owned many high performance bikes over the years, but recently moving to less powerful bikes, I considered going for power again. I test rode a lot of bikes then tried a couple of versions of supercharged Kawasaki’s and was hooked.

Breath taking power, quite comfortable and it fits me very well. It's very easy to ride at legal speeds too which is useful.

To my eyes looks quite good and has a real presence when out in the open. It's only ugly in pictures and inside.

Maybe offer a higher priced version with more upmarket suspension too. As is, this variant is very well priced for what you get.

I haven't changed the exhaust yet as I do not want to attract unwanted attention on a bike this fast. 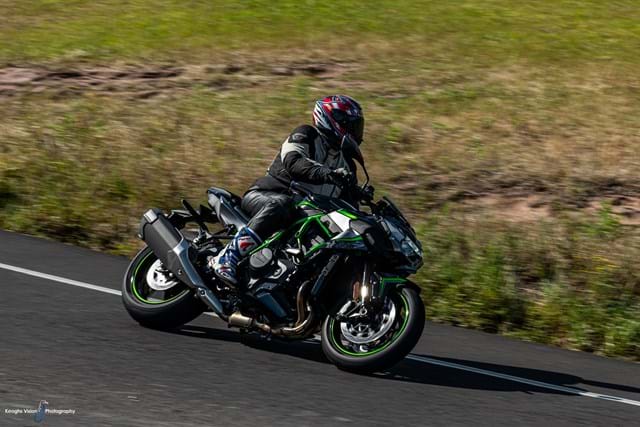 When moving, this bike feels light and flickable. Very stable and handles even better as you go faster.

The front suspension is super and back shock works better than many of the reports I have read. The roads I mostly ride are quite bumpy.

Hope to do a track day later this year to see how it fares in that environment.

I love the brakes. Gentle initial bite , progressive power and lots of feedback. You notice the bike's weight only when braking hard into downhill corners.

Yes, it fits me well. On the demo bike I did not like the way my knees dug into the bikes frame, however, fitting the accessory comfort seat lifted me about an inch and my knees now fit where I like them to be.

No problems so far. Quality appears to be first rate. 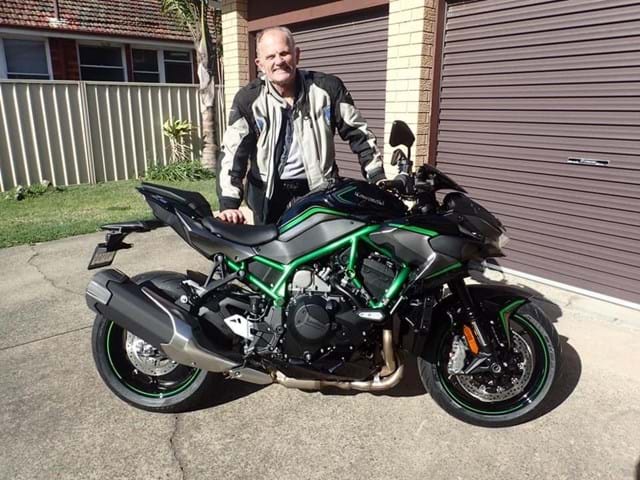 The Z H2 is pleasant to ride then when needed, or when you choose to, it transforms from a friendly Labrador to a Rottweiler. It has increased my bodies production of adrenaline by a large degree.