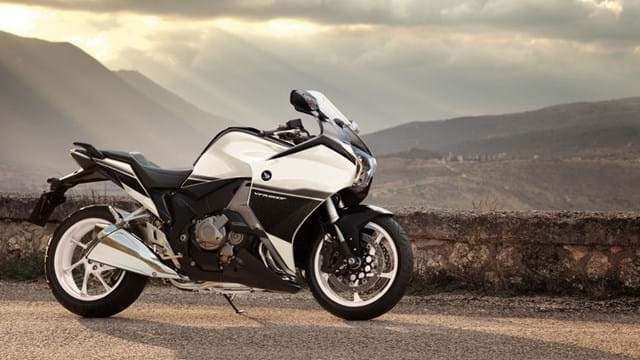 “ The VFR1200F is indeed the definitive sports tourer and if it’s a sports tourer you’re after, it should be on your shortlist. ”

The 2012 Honda VFR1200F is a premium sports tourer with a shaft drive. It was first launched in 2010 with Honda's fancy automatic DCT gearbox as a key option. 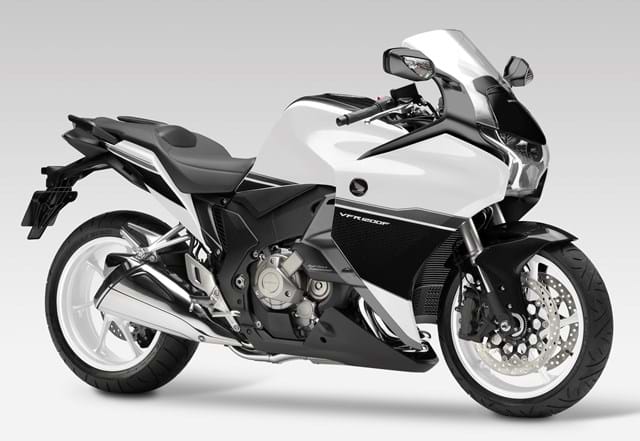 The VFR1200F suffered one serious issue; poor marketing. Prior to 2010 the biking world were preparing for a bike that was to change motorcycling as we knew it, or so Honda were suggesting. Rumours ranged from a V5 superbike to a V4 tourer to replace the Pan European.

When Honda revealed a very good, but not goalpost moving, sports tourer with an odd looking front end and a below average sized fuel tank, the UK press took to criticising the bike in a big way. Interestingly, European and American press loved the bike from day one with phrases like ‘the definitive sports tourer’ being used.

As such sales figures suffered. In an attempt to recover sales numbers, Honda released a revised model in 2012 with free full luggage and slightly nervously, I bought one. Now, six years and fifty thousand miles later, what has the bike been like?

Despite its size and weight, it handles very well, is beautifully balanced at low speed and has far more power and speed than I will ever need.

It’s comfortable(ish), easy to ride, has luggage and a shaft drive. The length of the bike means that a bit of effort is required to turn the bike at higher speeds but once turned tracks perfectly. The benefits of this long wheelbase however is total stability at speed.

The luggage locks and detaches with the ignition key and is all very strong and robust. Indeed, although with some understandable scuffs and scrapes, strong enough for the top box to handle bouncing down the motorway after some nugget (me) failed to fix it to the bike properly.

The 29 litre panniers could do with being a little bigger as could the 31 litre top box; Honda offer a 46 litre option, standard on the GT model.

The fairing is a wonder. Using the same layered technology as the Moto GP bike, the fairing channels wind, weather and heat from the engine away from the rider.

And it works better the faster you go, eventually creating a slightly eerie pocket of quiet air around the rider. Taller riders do report some buffeting, apparently cured by the screen extender, again, standard on the GT. 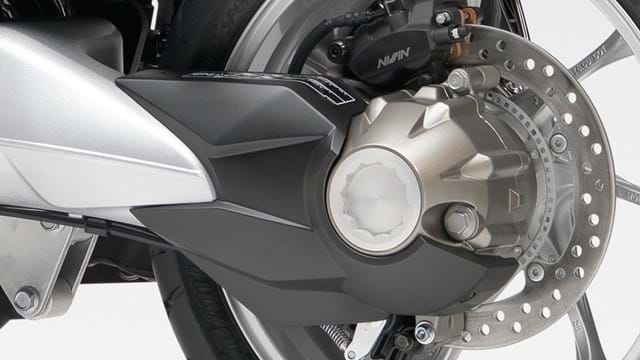 Obviously, it doesn’t quite turn like a 1,000cc sports bike, but it does have a pretty good go at stopping like one! Up front a pair of 320mm discs gripped by two six pot calipers offer huge stopping power, enough to sometimes skip the rear wheel. These are combined with a two pot caliper and a 280mm disc at the back to steady the bike.

Speaking of brakes, the linked brakes work far better than older Hondas but necessitate the need for four separate pads per front caliper. That makes front pad changes expensive at around £100 a pop. Exacerbating this of course, the lack of engine braking means you’d be changing the pads more often than normal, say every fifteen to twenty thousand miles.

With the rear two cylinders out of the wind, the bike does run hot with the gauge regularly showing three bars out of a possible five.

However, a huge radiator and twin fans do an excellent job of regulating this and in six years I have never seen four blocks showing even whilst travelling in Europe in 35+ degree heat.

What is very clever is that the rear cylinders sit inside the front cylinders. This means that the ‘waist’ of the bike is very slim, so despite a medium seat height shorter legs, like mine, can easily reach the ground.

This leads us to the obvious star of the entire package, that wonderful engine. Soichiro Honda himself, who knew a thing or two about engines, once said that the best engine configuration for a motorcycle was the V4 and this one is a belter.

As with all Honda V4s, the bike makes around 90% of its peak torque at just 4,000rpm. This makes gentle acceleration feel slightly flat and can be very deceptive up until 7,000rpm when the main exhaust opens, the bike starts to wail like a banshee and then takes off for the 11,500rpm redline. Three figure speeds can be very easily reached if you’re not paying attention; this isn’t a bike for inexperienced riders.

But this huge torque curve also means a large usable range. Third gear for example offers strong drive from 30mph up to twice the national limit for those who care little for their licence! On a twisty B-road, select second or third and treat as an automatic. And 40mph to 60mph in less than two seconds makes for easy overtakes.

Honda are rightly proud of the slipper clutch and the ‘perfect primary balance’ of the V4 configuration, negating the need for the usual balancer shafts. And these do make for a smooth, free revving engine, but it also means that there is very little engine braking. A VFR1200F rider can expect to use their brakes far more than on say a Hayabusa. 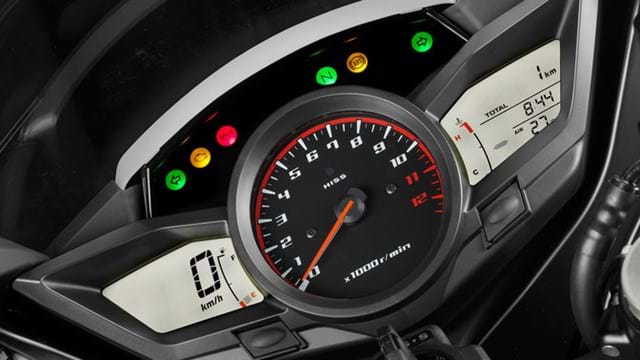 Fuel consumption varies a lot offering 50mpg+ under gentle touring down to less than half that on track. Typical average is around the 40-45mpg area equating to around only 150 miles before the LCD display starts counting down the number of miles left, usually starting at around 30.

A bike of this weight, power and torque can make very short work of tyres. Michelin PR4s last me around 6,000 miles when other types of bikes seem to manage over 10,000 miles. And as a RoSPA Diploma holder, I like to think my riding style looks after tyres.

8,000 mile service intervals are welcome but be aware that every second service requires access to the valves, which takes a lot of time and therefore cost. Expect costs of around £350 for these major services, £150 for minor ones.

Not many. A warranty claim for the rear brake light switch and a recall for the shaft drive have been the only real issues.

The slightly long reach make U-turns a struggle for shorties like me but I’ve never been great at U-turns anyway!

Could it do with more range? Yes, but how often do you do more than 150 miles between breaks? I have seen 200 miles once whilst coming back from Oban, having found two closed petrol stations, but I was nervous!

Could it be lighter? Again, yes. But it’s so well balanced that the only time you notice that weight is when you push the bike back into the garage.

The slightly sporty riding position may not suit a lot of riders of larger touring machines or naked upright bikes but being a sports bike rider at heart, I like it. Try it out before buying.

Is it reliable? Oh yes. The bike has taken me around Scotland numerous times, into Europe several times and has never missed a beat when others with me have overheated, failed to start, suffered from failed electrics, used oil and so forth.

The only issue I have had was the bike missing slightly over some of the higher passes in Switzerland whilst using 95 octane fuel. Honda recommend 98 octane, a switch to that and all was well, again. I like to fill up with 97/98 every other tank now.

And so to finalise. Only my opinion of course, but for me the VFR1200F is indeed the ‘definitive sports tourer’ and if it’s a sports tourer you’re after, it should be on your shortlist.

Check out this 21,000 mile video review from anthony hoskin.