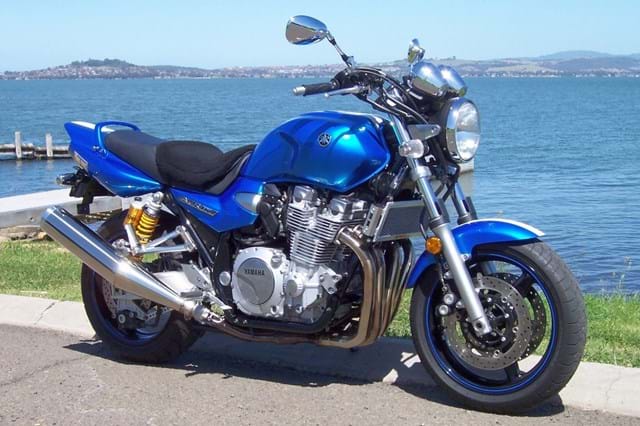 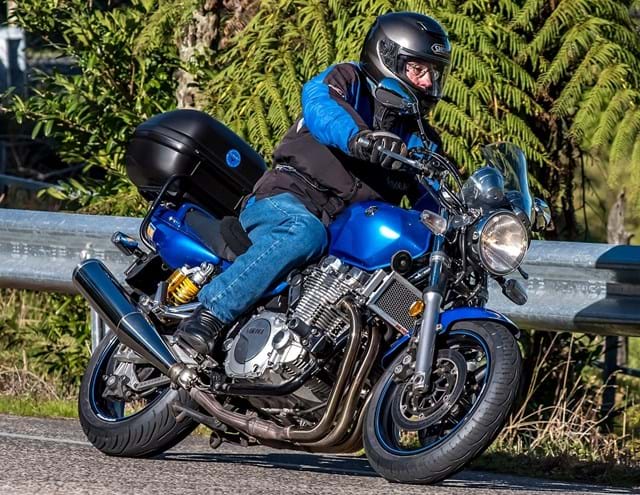 Perception; it’s a strange thing. Perception and reality. Sometimes the way we perceive things isn’t really the way they are.

Take the Yamaha XJR1300 for example. It’s got the whole “retro” thing happening of course, and that’s a big part of its character, but it’s also perceived as a big-bore muscle-bike; a kind of two-wheeled Arnold Schwarzenegger. And that’s what it is. Well, kind of. But it’s not that simple.

The “muscle-bike” image is certainly a big part of its character though. And, a bit like Arnie with the sleeves ripped off his shirt, it has its engine prominently on show to enhance that image. But, as I’ve indicated above, it’s not really the big and brawny beast we might perceive it to be. The reality is something different.

You get a hint of this when you look at it: the bike looks like something from the 1970s or 80s. You know, back in the halcyon days of the UJM (Universal Japanese Motorcycle).

And that’s what it is: it has that “Jack-of-all-trades-master-of-none” aspect about it that was the very essence of the UJM, and was what made them eminently practical and able to be ridden in any circumstance or situation. Almost anyway.

You might think that the lack of a fairing limits its capabilities on the motorway. To an extent it does but there was a time, which older readers will remember, when naked bikes were the norm; fully-faired “plastic-fantastics” were very rare. Even high-performance bikes were mostly what we now call “nakeds”. That’s the sort of world the XJR pays homage to. 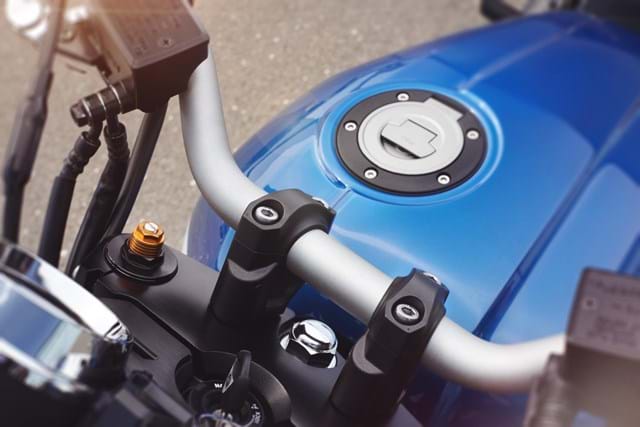 One of the main things that attracts me to the bike is the comfort: it’s a comfortable bike to sit on and to ride. The upright riding-position helps this and it feels quite natural. The pegs are set reasonably low, so your legs aren’t bent up and cramped.

On the subject of your legs, you sit pretty close to the engine, and your knees end up right behind the big mill. But there are thick rubber heat-shields behind the engine at each side of the bike to stop your knees from actually touching it and they work. I found my lanky old legs could touch the knees on the rubber shields if I moved forward a bit, but it wasn’t hot.

One thing I found not to my liking when I first rode the bike was that the bars were a bit too high; and they had an almost pointing-upwards feel. I’ve found this with a few nakeds actually.

The solution is simple though: they’re old style bars, so all you do is loosen the clamps and rotate them to the angle you prefer. The seat isn’t quite the soft cushy style that used to be fitted to those bikes back in the 70s, but it is still comfortable.

Now, off into the traffic. Remember that movie “Kindergarten Cop”? The one where Arnold Schwarzenegger played a cop who goes undercover as a kindergarten teacher. He looked very out-of-place among the kids: and you might think that the XJR would be similarly out-of-place around town.

A big muscle-bike in city traffic would be a bit awkward, right? Well, that’s where the perception and the reality can be different. The first time I rode one of these was on a relatively brief test-ride around city streets and the XJR handled the traffic with ease.

In fact, I rode it back-to-back with a Triumph Sprint ST which I was considering buying; and the big Yammie felt easier to ride through the traffic and back roads than the Sprint. It’s the sort of bike that you quickly feel confident with.

It’s a big bike, and it’s reasonably heavy, but once on the move you don’t really notice the weight so much – unless you’re trying to flip-flop it through the twisties.

It's good. It’s easy in traffic, as I mentioned above, but also good on the open road. A gentle push on the bars is all that’s needed to get it swinging through the turns.

I got to thinking about this during my initial ride, and particularly in comparison to other bikes I’d ridden. In quite a few tests I’ve made the comment that the bike “took a bit of getting to know” in terms of the handling. But with this bike, as I said, I was confident with it right from the get-go.

The ride is also very good. Over back-streets with typical patched tarmac and bumps etc it handles well. Smooth and comfortable.

Those Ohlins at the back really are good! They’re fully adjustable too, as are the front forks: a great set-up all-round. 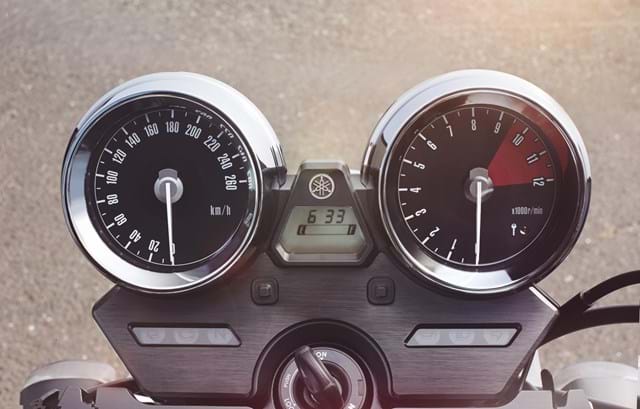 It's pretty basic, with a big analogue speedo and tacho. The speedo is numbered to 160 mph, and the tacho red-lines at 9,500rpm.

There’s an LCD display for fuel-level, odo and clock, and the usual warning-lights for other things. While the instruments are generally easy to read, the neutral light and indicators can be hard to see in strong sunlight.

But let’s get to the heart of the matter; that big engine! It’s a 4-cylinder, of course, with a capacity of 1,251cc. Yamaha are exaggerating a bit with their label of “1300”!

It’s old-school being an air-cooled unit, and tracing its history back through XJ and FJ predecessors, even to the old XS1100 of the 1970s. The compression-ratio is a rather low 9.7:1 so you know it’s not going to be a screamer.

It develops its maximum power of 97bhp at 8,000rpm. Torque, which is where an engine like this is really going to shine, tops out at 108Nm, developed at 6,000rpm.

It’s certainly not the most powerful donk on two wheels, but its character is definitely muscle-bike. It’s Arnie with his sleeves rolled-up! It feels strong and powerful.

Fire it up and, just like the a V8, there’s a healthy throb. But it’s all pretty smooth: you’re aware that there’s a big healthy donk pulsing away underneath you, but it’s never harsh or uncomfortable.

The only criticism – which, strangely, applies to some other Yamahas, with totally different engines – is a slight harshness at around 4,500rpm. Nothing serious, but enough to make you want to go slower or faster. 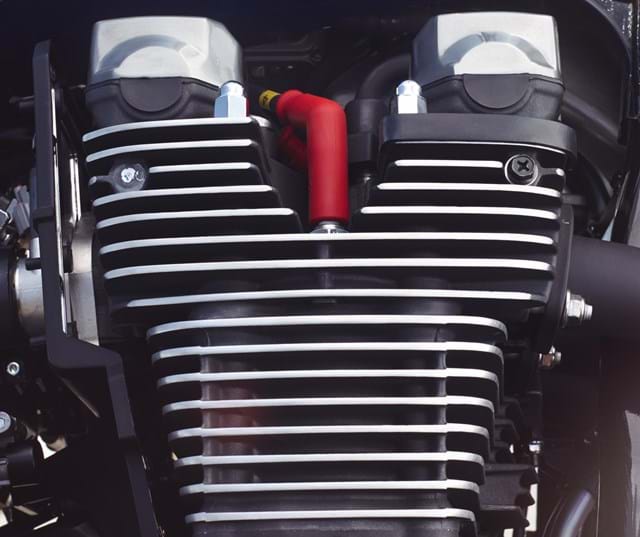 You’d probably expect it to pull away easily from low revs, and it does. Just twist the throttle, at pretty much any speed, and the surge of torque sends it rushing away instantly. Even at 1,500rpm it doesn’t object to accelerating away in top. That low-end grunt is one of the things I love about this engine!

Acceleration is quick, and it’s great fun to give the bike a decent handful away from the lights and watch the traffic behind diminish to mere specs in the mirrors! The way it eats up even the steepest of hills, even in top gear, is another thing I love about it.

Top gear (of 5) is geared at 17mph per 1,000rpm. With the torque and general engine characteristics, you can easily use top around town, with the engine ticking over at 2,500rpm – 3,000rpm. It feels fine like that, but will also cruise at 70 on the motorway with total ease.

They are good. Yamaha grabbed them out of the R1 parts-bin when they put it all together, so you know they’re going to work well. But they’re smooth and progressive too: which is good, because there’s no fancy ABS.

So there it is. A big brawny muscle bike and a sweet-handling commuter. Yep, it’s actually both! It’s a genuine “all-rounder”.

Most bikes seem to specialise in one area: they’re a sports-bike, a commuter or a tourer etc. But the XJR, despite how it might be perceived in the market-place, is a bike that will have a go at most of those roles. It might not be top-notch at any one of them, but it’ll do them all pretty well.

Check out this useful video review from TheLoneWolfRider.