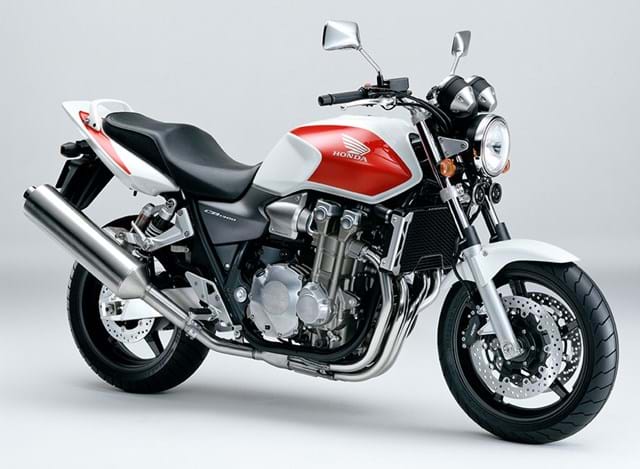 Despite weighing 3 kg less than the CB1000, this replacement is well kitted out. Under the seat there's a handy 12.4 litre luggage space, the handlebar risers can be adjusted to move the bars forward 20 mm for larger riders and there's an LCD clock/fuel gauge nestled between the analogue clocks.

Accessories include a mini smoked flyscreen, protection mushrooms, rear carrier and alarm. The 5-spoke 17" wheels take a 120/70 tyre at the front and 180/55 at the rear.

2005: Fuel injection re-tuned for smoother torque delivery, side covers made 10 mm narrower to make reaching the ground easier, ABS version available but it has 1 litre less storage under the seat and weighs 3.5 kg more.

2005: Honda produced a half-faired CB1300S version focused on all day touring at motorway speeds with ABS as standard. It's basically the same bike with a fairing stuck on which adds a couple of 1 litre glove boxes with the left being lockable, but it's 12 kg heavier than the non-ABS CB1300 at 264 kg wet.

See all of the naked models