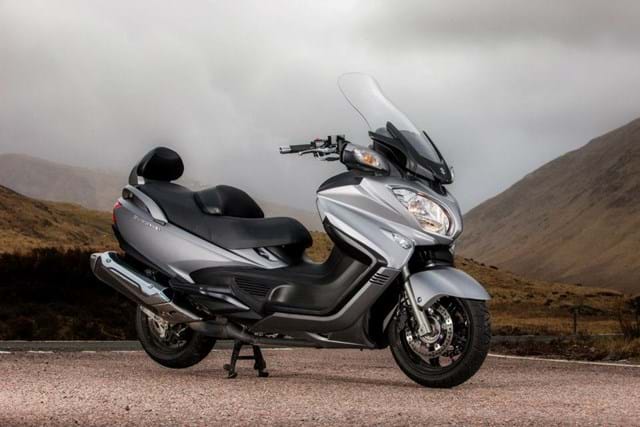 ‟
Would I recommend the Burgman 650? Absolutely. If you are looking for primary transportation or a solid weekend ride, the 650 has you covered with storage space, a longer ride span and comfort.
”
- Rating: 8 / 10

The Suzuki Burgman 650 is a premium maxi scooter and is powered by a liquid cooled 638 cc parallel twin four stroke engine, putting out 54 bhp at 7,000 rpm and maximum torque at 5,000 rpm. 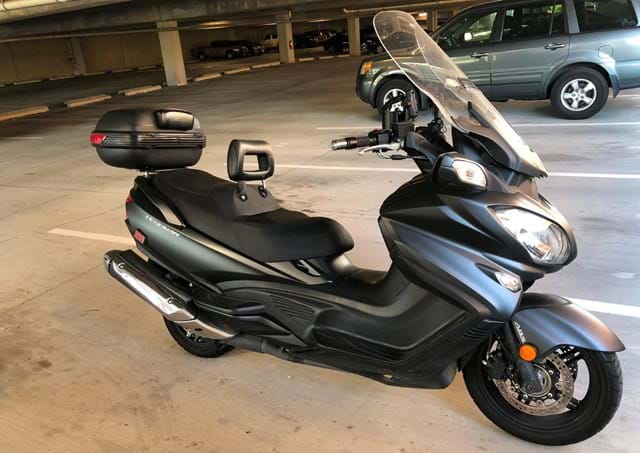 I started my scooter journey in July 2009 with a cheap 250cc Chinese scooter to see if this was a passing fancy or something more. Fast forward to 2018 and a scooter is my primary transportation.

After four months my wife also wanted to ride, so she took the Chinese scooter and I bought a used 2007 Burgman 400. Talk about a major upgrade.

This is when I knew two-wheeling was for me and Suzuki was the brand I was going to stick with. The 400 was gifted along and I began looking for my new scooter. I mean brand new…only me...and with a warranty for as long as I can get. The only question was 400 or 650?

Since I’ve had both, it was easy and difficult to determine what to land on. I started digging into forums to see what issues were out there, what was new in certain years and to see how fellow riders were getting along with long-term servicing.

I ended up settling on a matte black 2016 Suzuki Burgman 650 with a great deal and the seven year Suzuki Warranty. Now, onto the scooter!

Local traffic can be stop and go at times, so the 650cc engine is more than enough for getting out of tight spots, boosting around cars and getting up to speed quickly.

For the open road this engine deserves an open throttle ever so often. It has great torque and quite a comfortable ride for me. Some may opt for a seat cushion but I opted to remove the butt rest and install a BearCat back rest for the long ride or tired after-work support.

The dashboard is a mix of analogue speedometer, rev counter, digital fuel tank, temp, MPG and clock. It's a simple layout but effective for those quick glances when riding.

Fuel efficiency averages about 45 mpg with primarily town miles. When I get to the outer roads and motorway it leaps up to about 55 mpg. On long trips I can get close to 200 miles per tank if I stay around 65 mph. Not too shabby.

I use regular petrol and it’s been fine. Since I bought new, I’m letting the dealership do my services. I usually do them, but an oil change requires removing most of the bottom covers and I don’t want to break anything since this is my primary ride.

Space for storage is more than ample. Under the seat there is room for two helmets, plus there's a glove box and two dashboard side boxes.

I've added a top box and I have done weekend camping trips out of town with everything I needed. Suzuki really designed the storage space well. No other maxi scooter matches available space from the factory.

The Burgman is really a motorbike neatly sleeved into a scooter’s body. It is a comfortable ride with smooth acceleration, it grooves well on the twisty roads and is solid on the motorway.

I've had no issues passing large trucks and dealing with the wind plus this scooter is heavy enough to withstand a lot of air drag.

I’m sticking with the OEM Bridgestone hoops because they grip the road well and get good mileage between changes. Riding in the rain hasn’t been an issue with road traction and keeping rain gear under the seat helps.

I like switching from Auto to Manual shifting at times to either get more torque or to get better MPG. 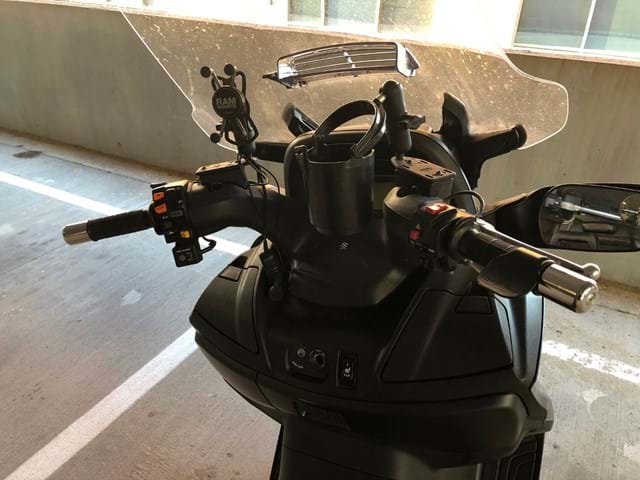 Would I recommend the Burgman 650? Absolutely. If you are looking for primary transportation and / or a solid weekender ride, the 650 has you covered with storage space, a longer ride span and comfort. 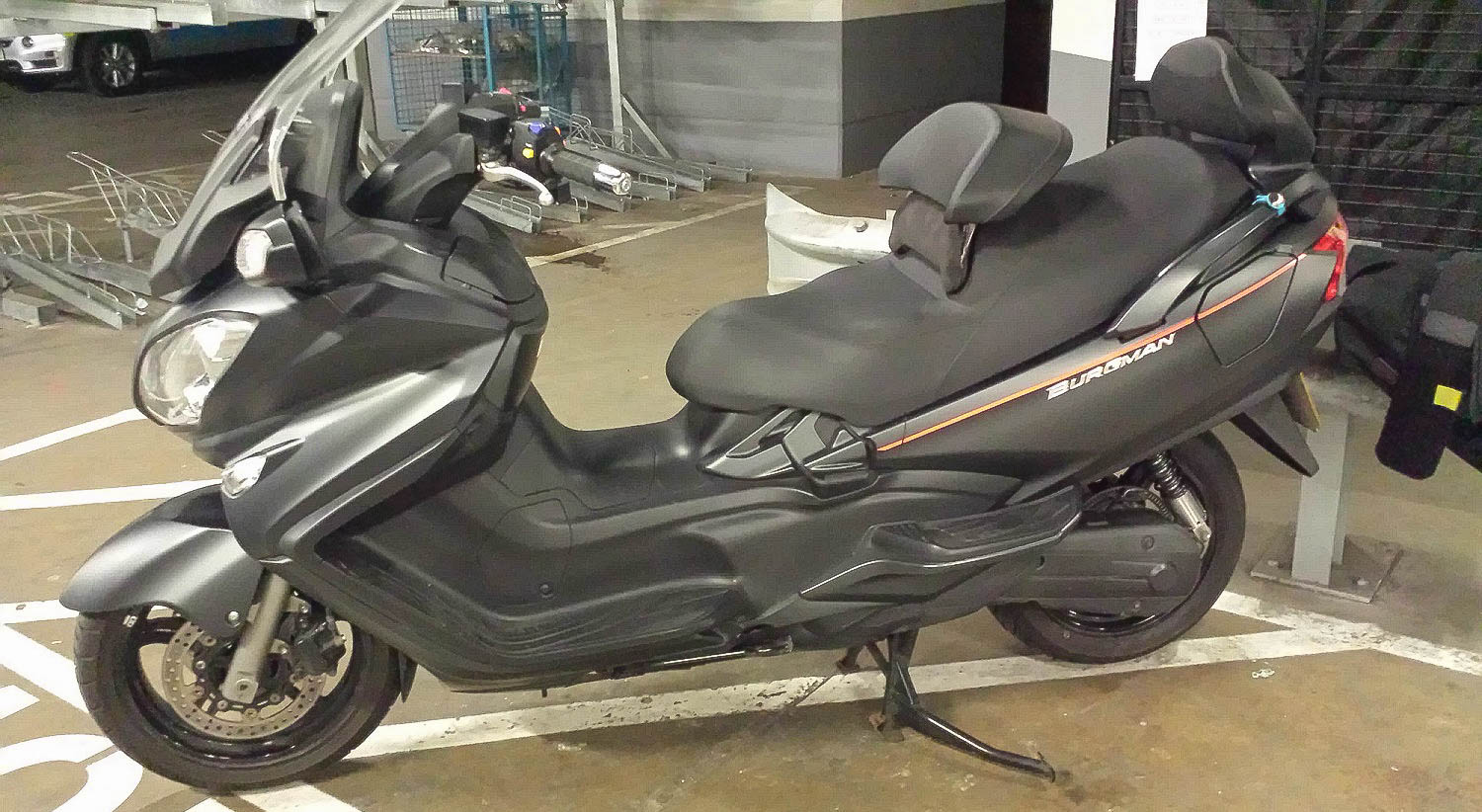 I've owned my Suzuki Burgman 650 since January 2017 and I brought it from Johns of Romford as their ex-demo bike with about 400 miles on it. It was first registered in March 2016, so when I got it, it was just under a year old.

I needed a daily commuter bike capable of doing a 167 mile round trip every day in all weather. The Burgman seemed to fit the bill, as it had decent weather protection, an adjustable screen, heated seat and grips, good fuel economy and most of all no chain to adjust every week.

In the 18 months I have owned it I have fitted a few bits including a Givi touring screen. I've found this invaluable in the Winter months because for one it kicks the air over your head and two it gives some wind protection for your hands.

I have also fitted some handguards, not for looks, but again to shield the weather from my hands. I have found these work well and prefer them to handlebar muffs.

I am now onto to my fifth rear tyre and third front. This time I have changed from the OEM Bridgestone's to Michelin Road Pilot 4's and I feel these have improved both the ride and handling.

Other than routine servicing, so far the only problems encountered are the rear wheel bearing collapsing at 18,000 miles, followed last week by the front one at 30,000 miles and the cooling fan not coming on…this will hopefully be remedied on Tuesday.

At the end of the day it is a very heavy scooter, but will happily sit at motorway speeds for long periods. In London traffic it is good and the weight / centre of gravity is very low which aids low speed filtering.

A section of my daily ride takes in about 20 miles of country lanes, again this is no problem and can be quite fun.

The vast storage space under the seat is very handy and big enough to take two full face helmets. All in all I think Suzuki have made a good all-round commuter bike and my current mileage is about 31,000 ... going up daily.

What Have I Changed