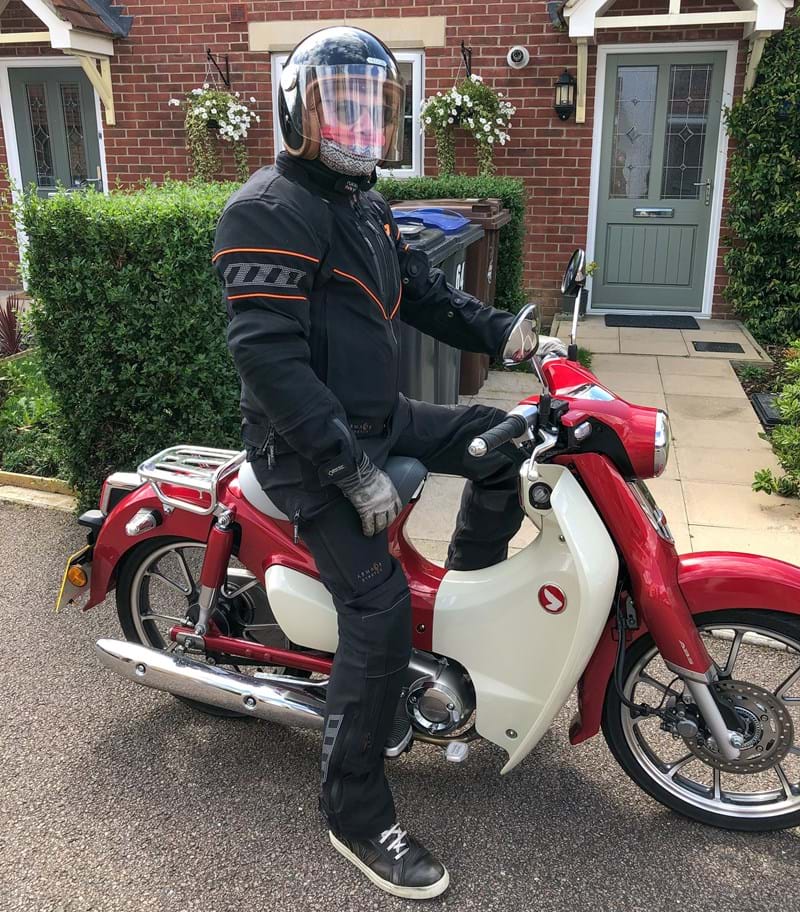 The Honda Super Cub is a premium retro bike with a hint of scooter styling, which reinvigorates the model for 2018 by drawing on the Honda Innova. 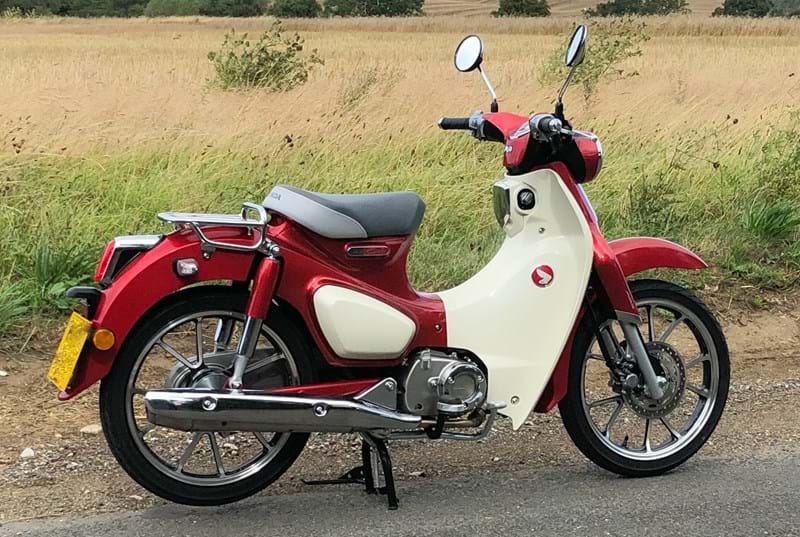 I’m 67 years old and had my first motorcycle in 1968, that’s 51 years ago at the time of writing. The only time I’ve been without a motorcycle was for about 7 years in the 70s when I just couldn’t afford it.

With the above in mind I’ve owned around 40 of varying sizes including several MZs, a couple of Jawa two strokes and one four stroke, BMWs, Guzzi’s, Triumphs (2 Meriden, 4 Hinckley including a Rocket 3 and Thunderbird Commander). There are more but enough is enough and no Japanese you may note.

I first rode a Honda Super Cub in the late 70s when a kind soul lent me a C70 for a couple of weeks to go to work on because my Ducati 350 MkIII was off the road.

It scared me half to death with its rising up of the front end under braking and the way one is disregarded by other road users. Fortunately I survived this terrifying experience.

The new C125 Super Cub is a different story. I got to thinking that, when I’m older and even more frail I could see myself on one of those. Very rapidly I came round to the idea that, actually I’d like one now.

I found a dealer who was prepared to give me a test ride and as soon as I moved off it made me smile. It’s a couple of months later and I’m still smiling.

The engine is wonderful for such a small power unit and is the best I have ever experienced in any-thing up to 250cc. The nature of it is such that I found it easy to accept its limitations as regards to speed and power.

I really enjoy the semi-automatic gearbox, which surprised me. It takes a little getting used to, but get used to it, one does.

Unlike the earlier versions it has modern features such as: front disk brake with ABS, LED lighting, keyless ignition, which is criticised, but I find it very convenient. Other features are fuel injection of course and it even has a simple and easy to use alarm.

It’s just so much fun to be sitting on it riding along. These things are known for the amazing journeys and reliability.

Handling is good, and seems sure footed. I found the braking extremely effective, even the rear drum works well. Obviously in heavy traffic it has the advantages of a small light machine and in all conditions I do find it a positive joy.

I have never felt the urge to go off piste, so to speak, do any green laning or riding through challenging fords, but this little machine really makes me feel such activities may indeed be great fun.

Petrol consumption is quoted by Honda to be 188 MPG but manufacturers are always optimistic and figures are set in ideal conditions not in the real world.

Nevertheless, on testing I found that I achieved 159MPG. Quite acceptable don’t you think?

My only disappointment has been the range. As the tank is only 3.7 litres (not even a gallon) the range seems to be in the high 70s to 80s before the fuel gauge reaches its last bar.

I am however still getting used to the fuel gauge reliability and did achieve 92 miles until reserve and 130 miles on a tank full when testing before it actually conked out, so not so bad on that occasion.

This was in a variety of conditions including country lanes, dual carriageway and a couple of hours in busy central London traffic. 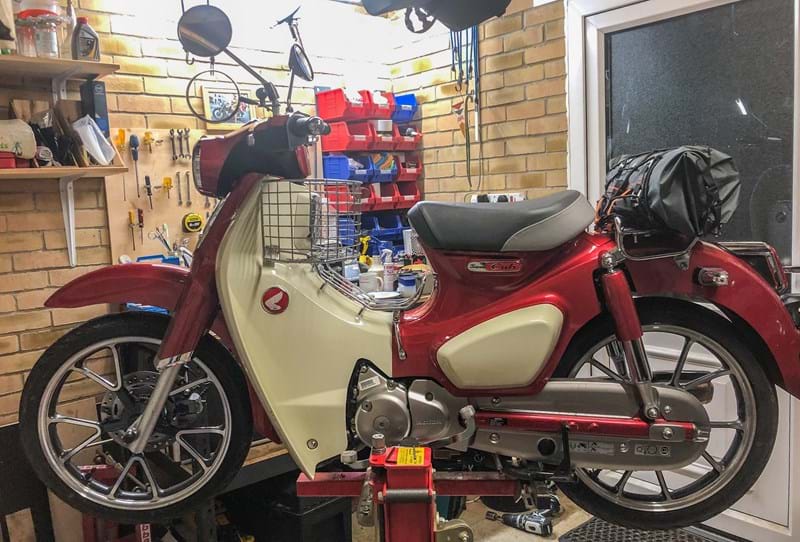 Practical everyday luggage is a bit of a problem due to its diminutive proportions but I’m working on it. It's partly due to the fact that I have an aversion to top boxes.

Still, people do long trips, holidays, and even go round the world on these great little machines.

People really seem to like it and often want to talk about it. On the first occasion that I filled up with petrol, before I’d got the nozzle to the tank, a guy jumped out of a van, ran over and engaged me in enthusiastic conversation.

When I went to pay, the chap at the till wanted to know about it. Then, on returning to this gorgeous little machine, another van driver wanted to tell me about the one his Dad had amongst further enthusing.

I can honestly say that in all my years of riding and owning motorcycles I have never been so inspired, and have already fitted a basket, centre rack, sat-nav cable and Ram mount to take my Tom Tom.

I like utilitarian machines and have a Ural combination and a 400cc Jawa four stroke single, which will cruise at 70MPH and still have a little for overtaking on a flat motorway, but it’s the Super Cub I always want to go out on. 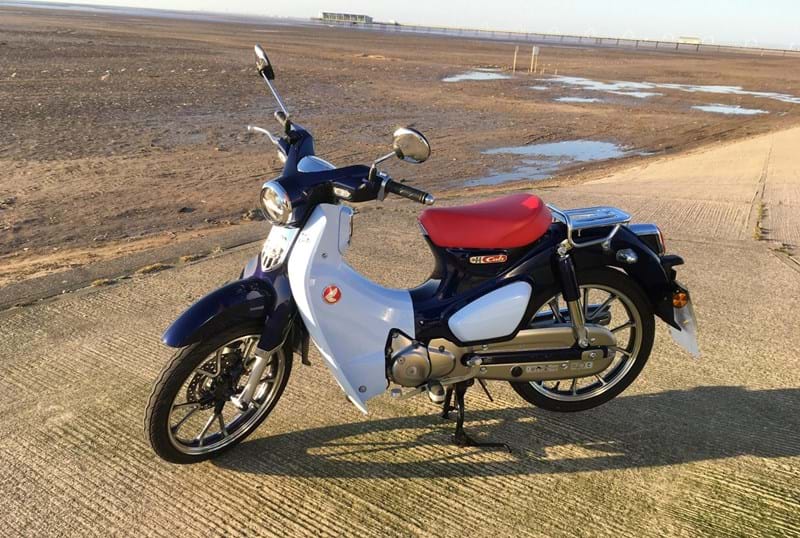 I’m a new rider with no knowledge of how the Super Cub works at all but here are some thoughts on living with it. I started riding a year ago on a twist and go Chinese plastic scooter. I loved it, for a little while.

My hubby then showed me a picture of the new Super Cub and I fell in love with its retro look. Now remember, I’m a new rider but not only that, I’m a new road user, I even used to ride my push iron on the pavement so I was a bit nervous about getting a 125 that had a bit more than just ‘twist and go’ to it.

I needn’t have worried though as I love my cub and have never looked back. I did get a top box to start with as it is my transport to and from work but I couldn’t stand that the ugly box was covering the gorgeous looking rack, with the Honda ‘H’ on it.

An added extra I would recommend for looks alone! So the top box came off and I don’t miss it at all.

The ride is so comfy, with a large seat to hold even the wider load quite comfortably 😉 Keyless start as well, now that’s a bonus!

I love the fact it shows me what gear I’m in too as, being a new rider and a bit forgetful I do still struggle to remember that.

I did worry about the gears, even though the gearbox is semi automatic and the gear change super easy, mainly because I have little coordination and thought I’d struggle.

To start with I struggled with changing down, too soon most of the time and the engine braking would cause me to jolt, however I’ve got used to that now and I change up and down with ease. 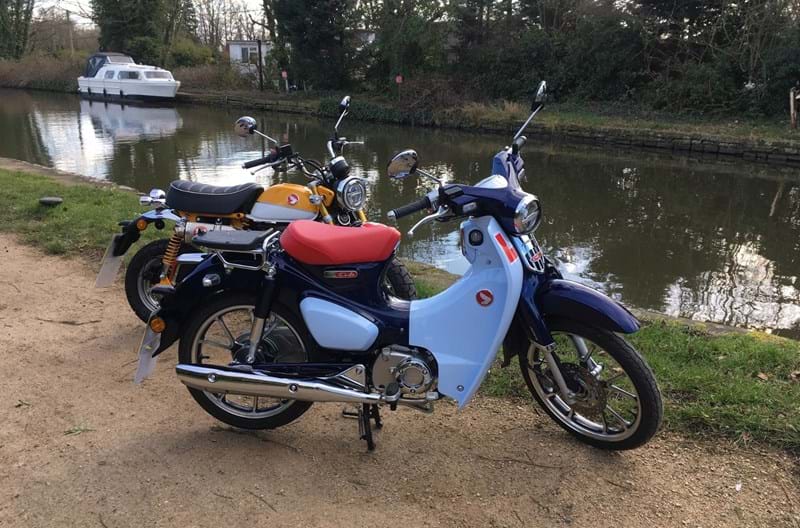 It’s pretty fast too for a little bike, on the straight I can take my hubby on his Monkey, not that this pleases him 😂

It may have something to do with the big wheels! Thing is I don’t only use it for commuting, I go out for rideouts as it is so easy and so much fun.

How Does It Go Down?

I take it to motorbike meets and it really does gather a crowd, all the ‘big bike’ riders absolutely love it. The older generation too, nostalgia!

I have seen an elderly lady pretending to get on it whilst her hubby takes a photo, she remembered having one in 1958 as a housewife.

I have thought about moving on to a ‘proper’ motorbike but always change my mind. She is my pride and joy, I love her so much and really have no intention of swapping her.