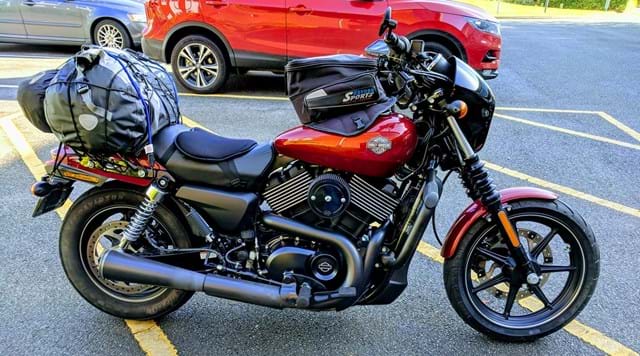 ‟
It handles urban and country roads with ease, with a nice amount of torque, low down power and acceleration.
”
- Rating: 8 / 10

The 2015 Harley-Davidson Street is an A2 licence friendly entry level cruiser and is powered by a liquid cooled 749 cc Revolution X V-Twin engine, producing 53 bhp at 7,000 rpm and maximum torque at 4,000 rpm. Having ridden a plethora of Japanese and a few American bikes over the years I do have an inherent fondness for the V-twin engine and geometry / feeling of a big cruiser.

Having said that Harley's newish liquid cooled addition to the family is an intriguing one, in that it has a bit of an identity crisis.
It's not quite a cruiser nor is it a naked sports bike of any kind, or a tracker, scrambler, retro or whatever label is floating around.

However, what it does do, is handle urban and country road riding with ease with a nice amount of torque, low down power and acceleration that is more than enough to get you out of trouble at lowish speeds. 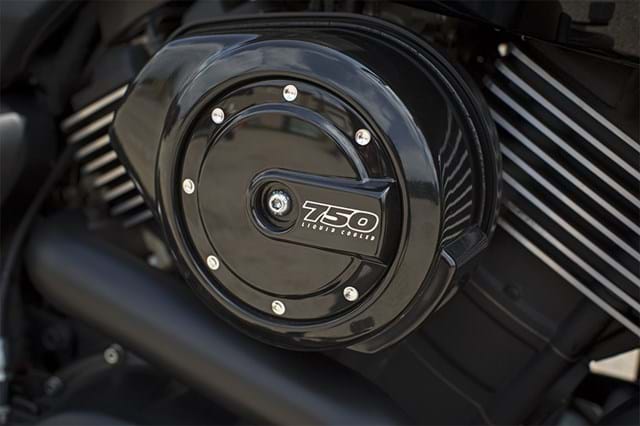 The engine has a good amount of torque as you would expect for a V-twin, and although its half the size of some of its siblings, it has a lot grunt and the geometry and manoeuvrability is very rideable, when dodging potholes and obstacles.

I haven’t ridden two up as yet but have loaded the XG with an inordinate amount of rally gear and it handled it beautifully, not really noticing it at motorway speeds.

On the non-ABS version they are a little spongy, but again with braided hoses maybe a little better.

As this bike was apparently designed around the streets of Mumbai, it does tell a lot about the design decisions made for this model. Although being at the bottom end of the Harley spectrum, the manufacturing quality isn’t really up to the standard one would expect, but then again neither is the price tag…

As the footpegs are kind of mid-mounted, they are great for urban riding but are a bit cramped for long motorway cruises. Forward pegs would be much more suited to any longer distance riding and if crash bars are fitted then motorway pegs are a must.

Having ridden the street on 300 mile journeys, the stock set up for me is not quite there yet. It does need a few modifications to compete with its big brothers / sisters.

The seat being my main gripe, it's just not comfy enough for long distance. The tank range is only approx 120 miles as well but by that point you will have no feeling left in your legs, backside or hands.

The stock mirrors are there for show and nothing else, unless you are about a foot wide you cant see out of them, bar end mirrors for me are a must.

All in all, a very capable and extremely affordable bike that can accommodate a multitude of riding styles with a little extra tweaking. A bit about you

I'm a retired (early) male biker who is out every weekend somewhere. I have over 45 years experience on bikes and ownership of about 25. Service and repaired myself.

Well if you buy new and have it dealer serviced you will get 24 months warranty. I service my bikes myself so this was not a consideration.

I have put around 10,000 miles on it so far which is mostly long rides (over 400 miles a time) to one or other coast from the Midlands.

It will cruise happily at around 80 mph which in my opinion is plenty for a naked bike. It handles well and is a very smooth, vibration free ride with a lovely comfortable upright riding position.

Well the mirrors need throwing away - pointless unless you want to see your shoulders.

What economy are you seeing?

First thing was some mirror extenders - brought from Amazon for a few quid - improves the visibility by 200%.

I purchased an FP3 tuner, Screamin' Eagle high input air filter and a Firebrand GP exhaust and did a stage 1 upgrade. Runs like a dream from 0 right up to 118 mph and now sounds like a competent cruiser.

Fitted some engine guards and some daytime running lights as I was sick of people pulling out in front of me!

Put a front fender extender on and extended the 'screen' by a few inches to cover the instruments. Also put on a centre stand which is needed if you intend to service it yourself and don't want to risk it falling over.

It's a lot faster and smoother than some of the bigger Harley's! The engine has to be the bikes strongest point - proving to be bullet proof and very reliable for long distance cruising.

Fitted with ABS so the confidence is there. Very light to steer at slow speeds but also feels very stable at motorway + speeds.

As above the ABS boosts the riding experience as it's one less thing to worry about - having said that the brakes have proven to be more than adequate for my riding style.

The upright riding position and comfortable seat make for a really enjoyable ride. I've had my 2016 Street for about two weeks and have just shy of 500 miles on her. My first impressions are good.

I'm short at 5ft 1ish in my boots so my main consideration was the seat height. I've struggled through the years with bikes that are low enough. All my previous bikes needed various lowering kits so when I tried the Street 750 it was a perfect fit. In fact you can lower it further but the standard fit me okay.

The riding position is very comfortable, a very neutral position unlike the 883 which I found a bit of a stretch. The speedo is very clear and the controls are simple to use.

The big con is the horrendous mirrors. Why Harley would produce a bike with such poor visibility is beyond me; all they afford is a good view of your elbows and whilst it's nice to know they are still attached it doesn't help when you have to see what's coming up behind you.

So that's the first thing I changed and added mirror extensions. I can now see better but I may need to alter again at some point.

The second con is the heat from the engine on your inner thighs whilst sitting in traffic. Being short puts your thighs within touching distance of the engine casings but this is easily remedied by changing your position whilst stationary.

There are guards you can buy from the US but I'm going to be laughing when the Winter comes and you're all freezing - I'll have my own central heating.

All in all, after two weeks, I love it.